Use MathWorks tools to model and simulate the unit, generate C code, run the code on real-time hardware, and analyze the data

"With MathWorks tools, we’ve eliminated throwing our algorithm designs over the wall for our software engineers to interpret. Now, with Simulink Coder and Simulink Real-Time, we can generate and run in real time the same code that we developed on the simulation side in Simulink." 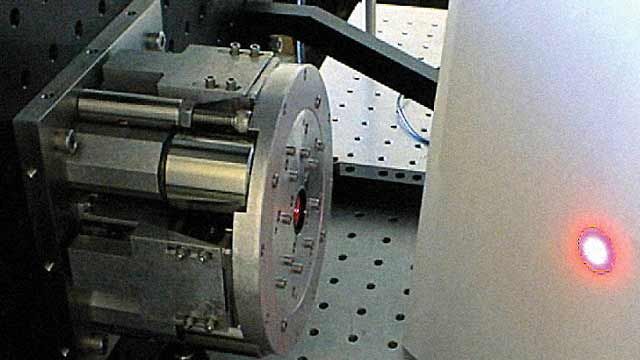 "MathWorks tools are a lot faster and more flexible than coding by hand," says Dan Eckelkamp-Baker, senior engineer and controls lead for optical inertial reference units at ATA. "We’ve been able to reduce errors and time-consuming testing and software debugging."

To sample and correct for deviations in the line of sight, ATA needed to create an IRU, similar to a fixed star. This reference would enable them to detect and correct the internal jitter sources, supporting increased pointing accuracy and precision.

For previous projects, ATA control engineers used a combination of development languages for various stages of the design process. This resulted in a lack of consistency among the control design models, the simulation, and the code running in real time on the hardware.

“We don’t have time to debug, test, and verify various development languages,” explains Eckelkamp-Baker. “We need to know that the algorithms we design can actually be run in real time.”

Control engineers used Simulink® to develop system models based on first principles. Starting with idealized models, they simulated the dynamics for the motion sensors and the actuators that move the optical platform and cancel vibrations. They used MATLAB® to linearize these models for controller design.

With MATLAB and Simulink, engineers applied balancing and numerical conditioning functions and blocks to reduce the order of the dynamic model subsystems before performing control system design.

Next, engineers used DSP System Toolbox™ to build signals into the model. They used the model profiler in Simulink to identify performance bottlenecks. Simulink Design Optimization™ and Optimization Toolbox™ enabled them to refine their filters and controllers to obtain optimal performance.

“Using Simulink Real-Time is so easy,” Eckelkamp-Baker explains. “You just set up the parameters, create the code, and run it on a desktop PC.”

ATA is in the final stages of testing its first-generation IRU for NASA Goddard.