“With Robotics System Toolbox, we seamlessly connected to and controlled our robot directly from the algorithms we had developed in MATLAB, enabling us to minimize development time. We used the time we gained to further our research into new tactile object recognition algorithms.” 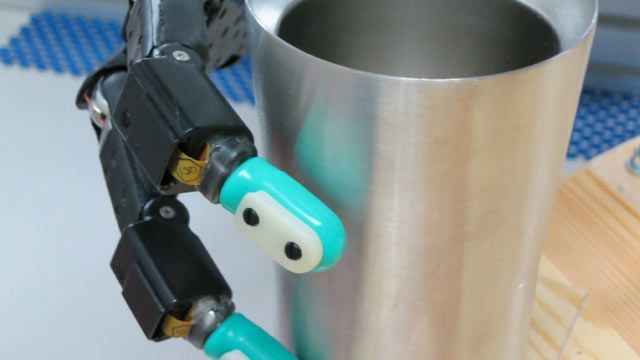 Robots that can recognize objects via tactile sensations instead of visual cues have a wide range of potential applications, including surgical procedures and rescue operations. Researchers at the Intelligent System Control Laboratory at Nara Institute of Science and Technology (NAIST) in Japan have developed algorithms that enable a dexterous robotic hand equipped with sensors to identify objects via pressure, vibration, and temperature. The object recognition algorithms employ an active learning approach: The hand performs an action such as rubbing, squeezing, or pulling the object, obtaining tactile information that it uses to plan its next action.

“MATLAB let us focus on conducting our research rather than writing code,” says Takamitsu Matsubara, assistant professor at NAIST. “Usually when we are working with a new robot there is a lengthy code writing phase, but MATLAB and Robotics System Toolbox enabled us to minimize this phase and concentrate on improving active tactile object recognition.”

Machine learning and object recognition algorithms often require numerous calculations and matrix operations. The NAIST team was already using MATLAB to accelerate the pace of their research. Their challenge was to accelerate testing by connecting their algorithms directly to the Robot Operating System (ROS)-enabled Shadow Dexterous Hand robot that they were using in the lab.

For the object recognition algorithm, they used Optimization Toolbox functions to identify the exploratory actions that would provide the most useful new information about the object.

Before testing the algorithms on the actual robot, the researchers ran simulations in MATLAB using a mathematical model of the target object to generate input data.

They accelerated simulations, optimizations, and matrix operations by executing them on several processors of a multicore computer using Parallel Computing Toolbox™.

In order to establish a communication between the algorithm and the ROS-enabled Shadow robot, the team used Robotics System Toolbox to access the robot’s ROS API directly from their MATLAB code.

They invoked Robotics System Toolbox functions in their algorithms for publishing hand and fingertip positions to the robot and for subscribing to BioTac sensor data from the robot.

The NAIST team has completed development of algorithms capable of identifying 10 different objects. They are working on enhanced versions that can identify 100 objects or more.

Learn more about Nara Institute of Science and Technology