OK. Well my problem today is a little different. Because I don't have two initial conditions, as we normally have for a second-order differential equation. Instead, I have two boundary conditions.

So let me show you the equation. So I'm changing t to x because I'm thinking of this as a problem in space rather than in time. So there's the second derivative. The minus sign is for convenience. This is the load.

So my solution somehow does something like this. Maybe up and back down. So it's 0 there, 0 there, and in between it solves the differential equation. Not a big difference, but you'll see that it's an entirely new type of problem.

I'll put in x equal zero. And then I'll have y of 0, which is y particular at 0, still defined, plus C times 0, plus d. That's the solution at the left end, which is supposed to be 0.

And then at the right end, end, I have whatever this particular solution is at 1, plus now I'm putting in x equal 1. I'm just plugging in x equals 0, and then x equal 1. And x equal 1, I have C plus D. C plus D. And that gives me 0. The two 0's come from there and there.

OK. Two equations. They give me C and D. So I'm all solved. Once I know how-- I know how to proceed once I find a particular solution.

So I'll just do two examples. They'll have two particular solutions. And they are the most important examples in applications. So let me start with the first example.

And now I have the Cx plus D. The homogeneous, the null solution. And now I plug in. And again, I'm always taking y of 0 to be 0, and also y of 1 to be 0. Boundary conditions. Again, boundary condition, not initial condition.

So this answer is-- Cx, then, is 1/2 x minus 1/2 x squared. That's it. That's my solution. That function is 0 at both ends, and it solves the differential equation.

So that's a simple example. And maybe I can give you an application. Suppose I have a rod. Here's a bar. And those lines that I put at the top and bottom are the ones that give me the boundary conditions.

And I have a weight. A weight of 1. Maybe the bar itself. It gives-- elastic force. Gravity will pull, displace, the bar downwards because of its weight. It's elastic.

And this function gives me the solution, gives me the distribution. If I go down a distance x, then that tells me that this part of the bar, originally at x, will move down by an additional y. Moves. So this is now at x plus y of x. And that's the y. And that is 0 at the bottom, 0 at the top, and positive in between.

OK. That was a pretty quick description of an application. And more important, a pretty quick solution to the problem. Can I do a second example that won't be quite as easy?

OK. So again, my equation is going to be minus the second derivative equals a load. But now it will be a point load. A point load. That's a point load at x equal A.

In my little picture of a physical problem, now I don't have any weight in the bar. The bar is thin. Weightless. But I'm putting on, at the point x equal A, right at this point, I'm attaching a weight.

So this distance is x equal A. Here's my weight, my load, hanging at this point. So I can see what will happen. That load hanging down there will stretch the part above the bar, above the load, and compress the part below the load. So it's a point load. Very important application.

For x less than A, I have minus the second derivative. And what's the delta function for x below A, on the left side of the spike? 0. And x on the right side of the load, again, 0.

And what are the solutions to the null equation? y is Cx plus D on the left side of the load, there. And now here it may have some different constants. y equals, what shall I say, E x plus F, on the right side of the load.

OK. But I still have two, C and E, to find. So what are my two further conditions at the jump? So far I'm on the left of the jump, the spike, the impulse, the delta function. And on the right of it.

But now I've got to say, what's happening at the impulse? At the delta function. Or at the point load.

OK. What happens at x equal A? That's the same as that. Let me draw a picture of the solution, here.

So that this solution runs into that solution. That's good. That's one more condition.

That equation. So you see what my solution is. It's a broken line with a change of slope. It's a ramp. It has a corner. All those words describe functions like this.

So that C turns out to be 1 minus A. So in this region, I have 1 minus A times x. In that region.

So it was 1 minus A. The 1 dropped away and left me with minus A. That's what the solution looks like.

And now I have to say one word about why did the slope drop by 1. The slope dropped by 1, from 1 minus A to minus A. And that has to come from this delta function. 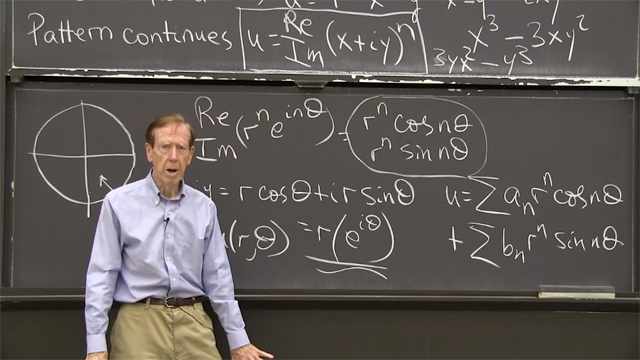