OK. A third video about stability for second order, constant coefficient equations. But we'll move on to matrices here. So this is a rather special video. So this is our familiar equation. And I took a to b1, I just divided out a. No problem.

So that's one second order equation. But we know how to convert it to two first order equations. And here they are. So this is two equations. That's a 2 by 2 matrix there. And so let me read the top equation. It says that dy dt is 0y plus 1dy dt. So that equation is a triviality. dy dt equals dy dt.

The second equation is the real one. The derivative of y prime is y double prime. So this is second derivative here, equals minus cy and minus b y prime. And that's my equation y double prime, when I bring the minus cy over as plus cy, and I bring the minus b y prime over as plus b y prime. I have my equation. So that equation is the same as that one. It's just written with a vector unknown. It's a system, system of two equations.

And it's got a 2 by 2 matrix. And it's called, this particular matrix with a 0 and a 1 is called the companion matrix. Companion, so this is the companion equation to that one.

OK. So whatever we know about this equation, from the exponents s1 and s2, we're going to have the same information out of this equation. But the language changes. And that's really the point of this video, just to tell you the change in language. So here it is. The old exponents, s1 and s2, for that problem, and everybody watching this video is remembering that the s's solve s squared plus Bs plus C equals 0. So that's always what are s's are.

So that has two roots, s1 and s2 that control everything, control stability. Now if I do it in this language, I no longer call them s1 and s2. But they're the same two numbers. What I call them is eigenvalues, a cool word, half German half English maybe, kind of a crazy word. But it's well established.

And when we meet matrices and eigenvalues properly and soon, we'll see about eigenvalues of other matrices. And we'll see that for these particular companion matrices, the eigenvalues solve the same equation that the exponents solve, this quadratic s squared and Bs and C equals 0.

Stable matrix is real part of the eigenvalues, lambda less than zero. So we're just really exchanging the letters s and the single high order equation for the letter lambda, and two first order equations. OK. I'm doing this without-- just connecting the lambda to the s, but without telling you what the lambda is on its own.

So what am I going to say at this early, almost too early moment about eigenvalues? Because I'll have to do those properly. Eigenvalues and eigenvectors are the key to a system of equations. And you understand what I mean by system? It means that the unknown-- that I have more than one equation.

My matrix is 2 by 2, or 3 by 3, or n by n. My unknown z has 2 or 3 or n different components. It's a vector. So z is a vector. A matrix multiplies a vector. That's what matrices do. They multiply vectors. So that's the general picture. And this was an especially important case.

So we can decide on the stability. So I'll just summarize the stability for that system. The stability will be-- well I have to tell you something about the solutions to that system. Remember z is a vector. So here are solutions. z is-- it turns out this is the key. That there is an e-- you expect exponentials. And you expect now eigenvalues instead of s there. And now we need a vector. And let me just call that vector x1. And this will be the eigenvector. And this is the eigenvalue.

And if I look for a solution of that form, put it into my equation, out pops the key equation for eigenvectors. So again, I put this, hope for solution, into the equation. And I'll discover that a times this vector x1 should be lambda 1 times x1. Oh well, I have a lot to say about that.

But if it holds, if a times x1 is lambda 1 times x1, then when I put this in, the equation works. I've got a solution. Well I've got one solution. And of course for second order things, I'm looking for two solutions. So the complete solution would also be-- so I could have it's linear. So I can always multiply by a constant. And then I would expect a second one, of the same form, e to some other eigenvalue, like some other exponent times some other eigenvector.

Here's my look-ahead message that solutions look like that. So we're looking for an eigenvalue, and looking for an eigenvector. And there is the key equation they have to satisfy. And that equation comes when we put this into the differential equation and make the two sides agree. So that's what's coming. Eigenvalues and eigenvectors control the stability for systems of equations.

And that's what the world is mostly looking at, single equation, once in awhile but very, very often a system. And it'll be the eigenvalues that tell us. So are the eigenvalues positive? In that case we blow up, unstable. Are the eigenvalues negative, or at least the real part is negative? That's the stable case that we live with. Good, thanks. 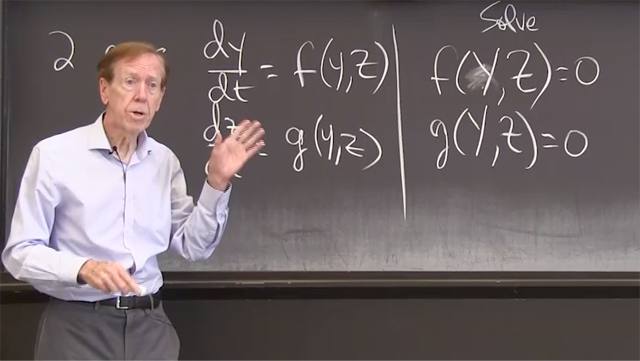