A critical point is a constant solution Y to the differential equation y’ = f(y). Near that Y, the sign of df/dy decides stability or instability.

That's not our central question. Our key question is, if I start at other points, do I approach a critical point, or do I go away from it? Is the critical point stable and attractive, or is it unstable and repulsive?

OK. So what does linearize mean? Every function is linear if you look at it through a microscope. Maybe I should say if you blow it up near y equal Y, every function is linear. Here is f of y. Here it's coming through-- it's a graph of f of y, whatever it is. If this we recognize as the point capital Y, right, that's where the function is 0.

So I just have to do a little calculus. The whole idea of linearizing is the central idea of calculus. That we have curves, but near a point, we can pretend-- they are essentially straight if we focus in, if we zoom in. So this is a zooming-in problem, linearization. OK. So if I zoom in the function at some y. I'm zooming in around the point capital Y. But you remember the tangent line stuff is the function at Y. So little y is some point close by. Capital Y is the crossing point.

And this is the y minus Y times the slope-- that's the slope-- the slope at the critical point there is all that's-- you see that the right-hand side is linear. And actually, f of Y is 0. That's the point. So that I have just a linear approximation with that slope and a simple function. OK.

So I'll use this approximation. I'll put that into the equation, and then I'll have a linear equation, which I can easily solve. Can I do that? So my plan is, take my differential equation, look, focus near the steady state, near the critical point capital Y. Near that point, this is my good approximation to f, and I'll just use it. So I plan to use that right away.

So now here's the linearized. So d by dt of y equals f of y. But I'm going to do approximately equals this y minus capital Y times the slope. So the slope is my coefficient little a in my first-order linear equation. So I'm going back to chapter 1 for this linearization for one equation. But then the next video is the real thing by allowing two equations or even three equations. So we'll make a small start on that, but it's really the next video.

OK. So that's the equation. Now, notice that I could put dy dt as-- the derivative of that constant is 0, so I could safely put it there. So what does this tell me? Let me call that number a. So I can solve that equation, and the solution will be y minus capital Y. It's just linear. The derivative is the thing itself times a.

It's the pure model of steady growth or steady decay. y minus Y is, let's say, some e to the at. Right? When I have a coefficient in the linear equation ay, I see it in the exponential. So a less than 0 is stable. Because a less than 0, that's negative, and the exponential drops to 0. And that tells me that y approaches capital Y. It goes to the critical point, to the steady state, and not away.

So the derivative of that is 3 minus 2y, and I've got two critical points. At capital Y equal 0, that's 3. And at capital Y equals 3, it's 3 minus 6, it's minus 3. Those are the slopes we saw on the picture. Slope up, the parabola is going up. Slope down. So this will correspond to unstable.

So what does it mean for this to be unstable? It means that the solution Y equals 0, constant 0, solves the equation, no problem. If Y stays at 0, it's a perfectly OK solution. The derivative is 0. Everything's 0.

Now, eventually we'll move somewhere near the other steady state. At capital Y equals 3, the slope of this thing is minus 3, and the negative one will be the stable point. So where y minus 3, the distance to the steady state, the critical point will grow like e to the mi-- well, will decay, sorry, I said grow, I meant decay-- will decay like e to the minus 3t because the minus 3 in the slope is the minus 3 in the exponent.

OK. That's not rocket science, although it's pretty important for rockets. Let me just say what's coming next and then do it in the follow-up video. So what's coming next will be two equations, dy dt and dz dt. I have two things. y and z, they depend on each other. So the growth or decay of y is given by some function f, and this is given by some different function g, so f and g.

But this is going to be like more interesting to linearize. That's really the next video, is how do you linearize? What does the linearized thing look like when you have two functions depending on two variables Y and Z? You're going to have, we'll see, [? for ?] slopes-- well, you'll see it. So this is what's coming. And we end up with a two-by-two matrix because we have two equations, two unknowns, and a little more excitement than the classical single equation, like a logistic equation. 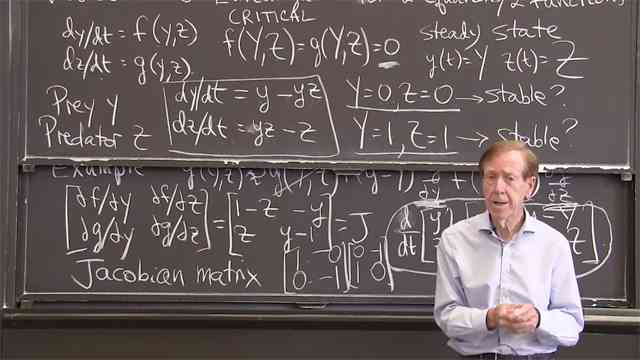