“Soon after ForWarn moved into production, it detected previously unnoticed hail damage that posed a threat to a watershed. We would not have been able to do this work as efficiently without MATLAB.” 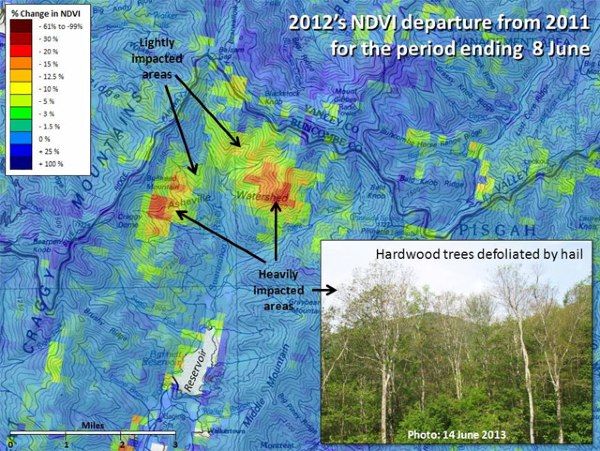 “With MATLAB we produced prototypes and built products much faster than would have been possible using a traditional programming language, such as C,” says Duane Armstrong, chief of the Advanced Technology & Technology Transfer branch at the NASA Stennis Space Center. “The quick turnaround enabled by MATLAB let us demonstrate new capabilities to our customers at the Forest Service very quickly.” 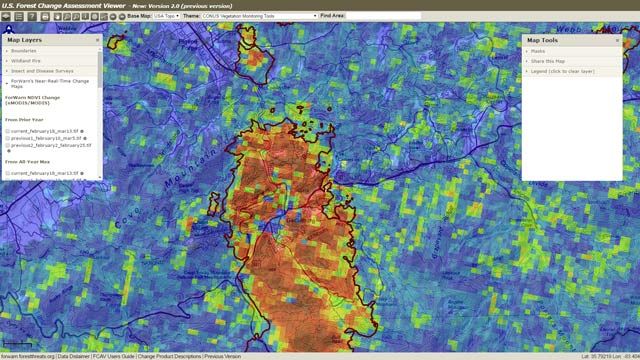 To develop a near-real-time system for detecting and monitoring vegetation changes across the 48 contiguous states, NASA engineers needed to analyze multispectral images captured by the Aqua and Terra satellites, build multi-timescale baselines of the gathered data, and then compare incoming data with the baseline to identify anomalies.

Each day, MODIS data is generated for 14 gridded tiles that span the 48 states, with each tile comprising 4800 x 4800 pixels. Twice a year the system processes 15 to 25 terabytes of data when updating the yearly baselines used to identify changes in vegetation.

NASA engineers needed to process and analyze large time-series data sets of images stored as mutidimensional arrays. They needed a development environment for interactively developing and rapidly evaluating new analysis algorithms. After demonstrating their algorithms, they wanted to deploy them into production without recoding.

NASA engineers used MATLAB to develop the two key components of ForWarn: the Time Series Product Tool (TSPT), which temporally processes MODIS data, and the Phenological Parameters Estimation Tool (PPET), which uses the processed data to calculate the greenness magnitude and the day of year for the peak of the growing season and for other phenological parameters of interest to the U.S. Forest Service.

For TSPT, the team at NASA wrote a MATLAB script that retrieves MODIS data stored in hierarchical data format (HDF) files in the NASA archive and imports the data into MATLAB. TSPT invokes Mapping Toolbox™ functions to convert imported latitude and longitude data to a projected map coordinate system.

The TSPT Band Processing module, also developed in MATLAB, generates the normalized difference vegetation index (NDVI) from the time-series data, as well as soil, moisture, water, and other indices.

Working in MATLAB, the team developed algorithms for TSPT to eliminate pixels distorted by clouds, shadows, the view zenith angle, and other effects.

After merging data from the Aqua and Terra satellites into a single time series, TSPT uses Signal Processing Toolbox™ functions to identify and remove spikes and other outlying data points.

Using MATLAB Compiler™, the team created standalone executable versions of their MATLAB based algorithms, which can be run by users who do not have MATLAB installed.

The ForWarn team has won multiple awards for their efforts, including the Interagency Partnership Award, which recognizes federal employees from at least two different agencies who have “collaboratively accomplished outstanding work in transferring a technology.” The ForWarn team consists of the U.S. Forest Service, NASA, DOE Oak Ridge National Lab, U.S. Geological Survey, and University of North Carolina at Asheville.