Throw a rectangular object with sides of three different lengths (such as a cereal box), into the air. You can get the box to tumble stably about its longest axis, or about its shortest axis. But if you try to make it tumble about it middle axis, you will find the motion is unstable. The model of the angular momentum is a nonlinear system of three differential equations. There are six critical points: the four corresponding to the long and short axes are stable; the two corresponding to the middle axis are unstable.

Here are the differential equations for the angular momentum of a tumbling box. Try throwing a book, or a box, or any rectilinear object whose three dimensions are all different, into the air with a twist, to make a tumble.

So the largest component is the first component. And the other two are small, but not too small. This is an easy problem numerically. There's no stiffness involved here. So I'm going to use ODE 23, integrate from 0 to 10, and here's the solution.

The blue component is the first one, and it stays near 1. And the other two are periodic, rotating around the 0. Let's go back and take another starting condition. Here it is again.

Now the other two components are really small. And when we integrate that, the blue component stays flat near 1. And the other two guys hardly move at all.

Now I'm going to go to the third critical point, 0, 0, 1. Do the same thing. Take a random number near there. Use ODE 23. Now the yellow component stays near one. And the other two move periodically around 0.

Now we're going to go to the middle critical point. We're going to try and get the box to rotate around its middle axis. The second component is the one near 1. And now we see completely different behavior.

This sienna component doesn't stay near 1. It goes down near -1, and comes back up. Let's integrate over a longer period, so we can see that behavior.

So it's periodic. But it goes down to -1 and comes back to 1. And the other two move in large amplitudes around 0. So this is the instability of that middle critical value.

Let's doing again. Same thing. 1 down to -1, and back up. It's periodic. These solutions are all periodic. But that middle critical point is unstable. Now I want to view these in a different way, graphically.

We can see that in the following graphic. It turns out that if a solution starts with an initial condition that has norm 1, it stays with norm 1. So the solution lives on the unit sphere.

But if we start near y, the solution takes off, goes over to near -y, turns around, and comes back to y. Periodic, but goes clear around the globe. That turns out, that's a circle actually, an orbit around x.

Let's zoom in a little bit. And we can see that y is a classic unstable critical point. Let's conclude by drawing a few orbits. 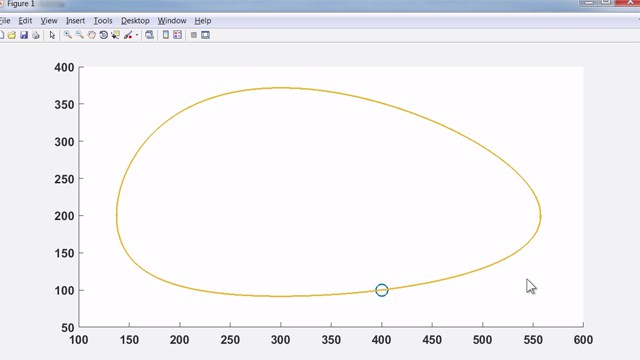