Design and implement a control system for a pneumatic robotic arm

Use Simulink and Simulink PLC Coder to model, simulate, optimize, and implement the controller on a programmable logic controller

“Using Simulink for Model-Based Design enables us to develop the sophisticated pneumatic controls required for the Bionic Handling Assistant and other mechatronic designs. With Simulink PLC Coder, it is now much easier to get from a design to a product.” 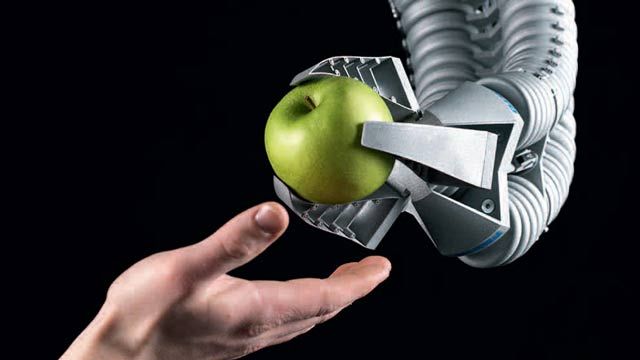 Inspired by the motion of an elephant’s trunk, Festo AG developed the Bionic Handling Assistant, a mechatronic arm that can work closely and safely with humans. Unlike industrial robotic arms, which are typically enclosed in safety cages to protect nearby workers, the Bionic Handling Assistant is designed to interact directly with humans. Incidental contact with the mechatronic arm is harmless because the arm is made of lightweight polymer components driven by compressed air. Also, the pneumatics are managed by a control system that yields immediately in the event of a collision.

Festo researchers developed the control system using MATLAB® and Simulink® for Model-Based Design, and then implemented it on a programmable logic controller (PLC) using Simulink PLC Coder™. “With Model-Based Design, we can model, simulate, optimize, and generate code to implement the controller all in the same tool environment,” says Dr. Rüdiger Neumann, head of the research department for mechatronic systems at Festo. “As a result, our development process is more efficient, not only for the Bionic Handling Assistant, but for any project that requires a controller implementation with code generation.”

With 11 degrees of freedom, the Bionic Handling Assistant is a complex system of 12 pneumatic chambers, 13 actuators, and 12 position sensors. The system’s 12 pressure controllers and 12 position controllers work in concert to control the motion of the arm, which weighs about four pounds (1.8 kg) and extends to 3.6 feet (1.1 meters). “Pneumatic systems are highly nonlinear and the trunk has elasticity, so we could not use simple PID controllers,” says Neumann. “To get optimal controller response, we needed active vibration damping and specialized nonlinear state-space models, with feedback and feedforward control structures.”

Festo’s research and development group is frequently asked to assess the feasibility of specialized customer applications. They traditionally developed and tested controllers for these applications on prototyping hardware. The process of creating a microcontroller solution for such a prototype, however, was time-consuming and therefore costly. “We wanted to use Festo’s own standard PLC products for real-time control without building new hardware for low-volume special controller applications,” says Neumann.

The researchers created plant and controller models in Simulink for the individual pneumatic chambers that make up the Bionic Handling Assistant, and ran simulations to verify controller functionality.

They generated C code from the model using Simulink Coder™. They compiled and deployed this code to prototyping hardware to conduct initial lab tests.

In MATLAB, the researchers performed system identification using measurements gathered during lab tests of the pneumatic arm to refine the plant model.

With a more accurate plant model in place, the team optimized the controller design in Simulink to improve its performance and stability.

They then used Simulink PLC Coder to generate IEC 61131 structured text from the optimized Simulink model of the controller. After importing the structured text into their 3S-Smart Software Solutions CoDeSys IDE, the team compiled and deployed it to a CMXR-C2 multi-axis controller from Festo.

To verify the PLC implementation, they compared its frequency response and time response against those of the Simulink model and the C code for the initial controller prototype. They performed additional iterations to improve performance by tuning the model in Simulink and regenerating structured text with Simulink PLC Coder.

The Bionic Handling Assistant has been demonstrated worldwide and has won innovation awards in Europe and North America. Festo is now using Simulink PLC Coder to develop other advanced mechatronic systems.

Watch the YouTube video about the Bionic Handling Assistant