Use Simulink and Simscape Fluids to model the wave energy system, including hydraulic and electromechanical components, and use MATLAB to analyze and visualize simulation and test data

“We can’t afford the time and expense of building and analyzing multiple physical prototypes. Instead, we put the effort into virtual prototyping and getting the design right in Simulink. Simulation reduces risk and fosters innovation because we can use it to quickly test novel ideas.” 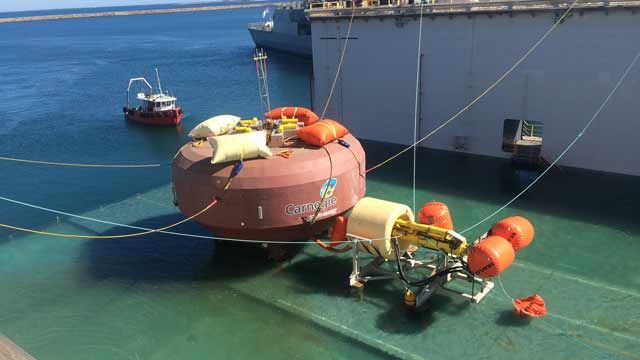 A CETO unit ready for deployment in the wave farm.

Harnessing the power of ocean waves to generate electricity has long been a goal for advocates of clean and renewable energy. Engineers at Carnegie Clean Energy took a major step toward realizing that goal with the Perth Wave Energy Project (PWEP), the world’s only currently operating grid-connected wave energy array. The project demonstrates the viability of the company’s CETO technology, which generates power from ocean swell via submerged buoys. Pumps actuated by the motion of the 11-meter-in-diameter buoys pressurize water to drive hydroelectric conversion devices, generating up to 240 kW of zero-emission electricity.

Carnegie engineers used Simulink® to simulate a virtual prototype of the CETO 5 technology.

“It would be horrendously complex to build a scale model of our full system for all the different variants we considered in the design phase,” says Jonathan Fiévez, chief technology officer at Carnegie. “With Simulink and SimHydraulics we built virtual prototypes that enable us to predict system performance under various sea conditions, simulate failure cases, and analyze loads so we can select the best design and accurately specify component requirements to our suppliers.”

Before building the CETO system, Carnegie Clean Energy engineers needed to know how much load would be placed on mechanical components so that they could be sized appropriately. Components that were too heavy or strong would add costs, but components that were not strong enough could fail in stormy seas. The engineers wanted to analyze loads and estimate energy output without building a scale model of the entire system.

In CETO systems, hydrodynamic force from the ocean is converted first to mechanical energy by the motion of the buoy, then to hydraulic energy by the pump, and finally to electrical energy by the hydroelectric conversion devices. Carnegie engineers needed a way to model this multidomain system and run simulations for a range of configurations, sea conditions, and faults. Further, they needed to rapidly analyze simulation results and data collected from deployed systems to refine their models, optimize designs, and demonstrate the technology to potential customers and investors.

Working in Simulink, the team created a 2D model of the buoy, the pump, and the tether connecting them. They modeled the moment applied to the pump as well as the pump’s angular displacement using a custom MATLAB® function incorporated into the Simulink model.

They used Segmented Pipeline blocks to model the more than six kilometers of pipelines in CETO 5 and represent the pipeline’s fluid inertia, fluid compressibility, and resistive properties.

After creating sea state models in Simulink based on 30 years of ocean data, the team ran hundreds of simulations to analyze loads, flows, pressures, fatigue, and other key system metrics.

They reduced simulation times by running multiple simulations in parallel on eight-core and twelve-core processors with Parallel Computing Toolbox™.

Hundreds of sensors in the PWEP installation gather data on pressures, flows, and temperatures in the hydraulic system; voltage and current frequency in the electrical system; and load, displacement, and acceleration in the mechanical system. After analyzing this data in MATLAB, the engineers used the results to validate their models. Initial tests suggest a strong correlation between the modeled and measured results. Carnegie is currently working on CETO 6, which is expected to produce 1 MW of electricity per buoy.