"We used MathWorks tools to design, test, modify, and implement a control system for a permanent magnet drive in one year. Given the resources available to us, it would have been impossible to deliver this on schedule without MathWorks tools." 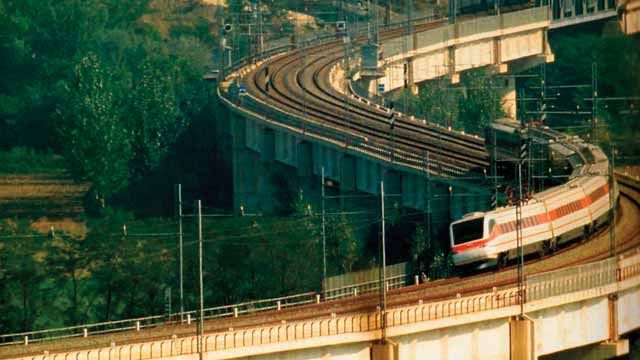 The power converters used on trams, metros, and trains are sophisticated, safety-critical systems that require hard, real-time responses. As a world-leading supplier of rail transport products, services, and systems, Alstom Transport relies on MathWorks tools to design, simulate, and implement these and other equally complex systems that support the world’s energy and transport infrastructure.

"MathWorks tools enable us to control every line of code, and the generated code is readable, fast, and compact," Han Geerligs, senior engineer at Alstom, explains. "Also, MathWorks tools are industry-standard, with extensive packages and broad support for embedded targets."

"A latency of 10 to 20 microseconds is too much because our cycle times are about 200 microseconds," explains Geerligs. "We also have complex multiprocessor models that can have a DSP running an interrupt process and a Power-PC CPU using a multirate process."

Adding to the challenge, Alstom engineers used disparate tools for algorithm development, modeling, and simulation. Moreover, the tools did not provide any automatic code generation capabilities, so they had to write code by hand.

"Our tools were not integrated, so we spent a lot of time writing conversion tools. Since we had no way to automatically generate code, we would design, make specifications, and then hand code," Geerligs recalls. "It took a long time to go from specification to implementation. There was no rapid prototyping, documentation took longer, we lacked an overview of the entire effort, and it was very difficult to implement changes quickly."

In the design phase, engineers use Simulink®, Simscape Electrical™, and Stateflow® to develop their control systems.

"Simulink makes it easy to transfer functions from one part of the design or to change the timing from timed to interrupt-driven, while maintaining efficiency," says Geerligs. "That kind of major design change would be very difficult without Simulink."

The engineers used Simscape Electrical to model the electrical components of the system, including the power electronic components as well as resistors, capacitors, and inductors.

Using Stateflow, the team modeled the supervisory control and control system states, including start-up, slow-down, and error handling. The communication protocol between the power conversion control and the system’s central fault handling unit was also implemented in Stateflow.

"Superstates in Stateflow were particularly helpful for fault handling. When we had a fault in a substate, we drew a line out of the superstate, and Stateflow ensured that it was always handled correctly," says Geerligs.

The Alstom team used MATLAB® to preprocess measurement data from fiberoptic interfaces and scopes for their simulations. They also used MATLAB to report and verify the simulation results. Geerligs used Control System Toolbox™ with MATLAB to create and analyze Bode diagrams and develop classical control algorithms.

After simulating the system in Simulink and Stateflow, the team used Simulink Coder™ and Embedded Coder® to automatically generate production-ready code. They integrated the code with a number of real-time operating systems, including Microware 0S-9 and Wind River’s OSEKWorks.

Alstom engineers reused their models from project to project. "MathWorks tools helped us define design patterns and share that knowledge in libraries," explains Geerligs. "Fault handling and electrical modeling, for example, were shared between the tramway project and the energy management project."