Use MathWorks tools to import the data, perform the analysis, and deliver the prototype

“MATLAB is like a treasure chest full of functions. I can honestly say that without MATLAB and all of these functions it would have taken us twice as long to complete this project, and at a much higher price." 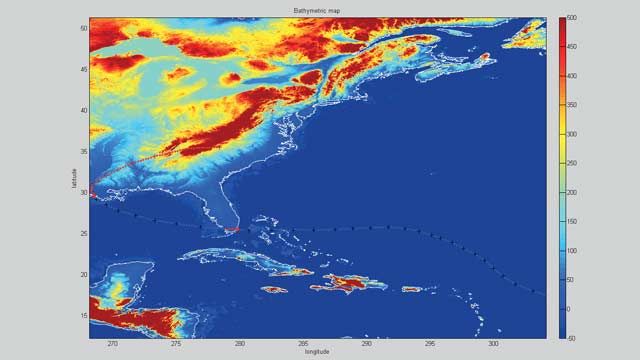 The Natural Perils Unit at Swiss Re used MathWorks tools to develop a next-generation prototype that predicts losses from potential natural disasters. The prototype consisted of various in-house models that they had accumulated over the years.

"MATLAB helped us transform 30 years of knowledge into one application in a relatively short period of time," says Gerry Lemcke, deputy head of catastrophe perils at Swiss Re in Armonk, New York. "MATLAB was the ideal software environment to bring a lot of people together to work on the complex and difficult tasks involved with this project."

The biggest challenge for Swiss Re in developing the prototype was time. In the reinsurance industry, major renewals typically occur in the last fiscal quarter of the year, which means that underwriters must be trained on new technology in September. That gave Lemcke and his colleagues only eight months to complete the project.

Over the years, earthquake, flood, and wind specialists at Swiss Re had created individual natural disaster models using various programming languages to calculate such factors as tropical cyclone wind speed and earthquake intensities. The Natural Perils Unit sought to import their large data sets from the various models into one prototype, using a familiar development environment.

In the algorithm development stage, Swiss Re needed to experiment and test their ideas by running many simulations as quickly as possible. Excel® could not handle the intensive numerical computation in the given timeframe, and learning Java® or C++ would require months of training.

“When it comes to calculating the tropical storm risk in the United States, for example, you’re operating with data on one million artificially generated tropical storms running across the entire North Atlantic,” explains Lemcke. “You need to analyze this data by running many fast simulations.”

The natural perils experts of Swiss Re pooled their years of experience in MathWorks tools to create the prototype in just eight months.

“MATLAB is a much faster environment to develop and test models—especially for non-IT developers like myself,” says Lemcke. “It is the perfect link between Excel and overly complex programming languages like C++ or Java, so it was the natural choice for us.”

Swiss Re first combined the models and then quickly imported all the historical data using the importing capabilities of MATLAB®. They then focused on developing the prototype by gathering requirements and feedback from the underwriters.

“Combining the models was purely experimental,” says Lemcke. “It was really learning by doing, which is the great thing about MATLAB. If you see that something isn’t working, you can refine and optimize for improved speed and data processing.”

Because they had data for only about 1000 actual storms in the North Atlantic, Swiss Re used Monte Carlo techniques in MATLAB to generate artificial tracks that gave the physical boundaries of possible future storms. The team validated the results by comparing this artificial data with historical data based on loss estimates.

Finally, their IT department rewrote the prototype as a Java application. More than 50 underwriters—from Hong Kong to South Africa to the U.S.—now use the application to calculate loss estimates for earthquakes and tropical cyclones. They enter as much information as possible on a specific type of natural disaster, import portfolio client data, and run an analysis that calculates the potential loss.

Learn more about Swiss Re