Radek on 13 May 2015
⋮
Commented: Radek on 22 Jul 2015
Accepted Answer: Brett Shoelson
Hello, I am trying to make OCR algorithm for incomplete numbers. First step should be to reduce image to skeleton. This is done fine with Matlab function.
I have troubles at prunning stage i have tried this approach: http://www.mathworks.com/matlabcentral/answers/88284-remove-the-spurious-edge-of-skeleton
But it isn't reliable enough. and i can't run it twice because it would reduce image too much.
I have also tried http://www.ehu.eus/ccwintco/index.php?title=Skeletonization,_skeleton_pruning_and_simple_skeleton_graph_construction_example_in_Matlab
Which is way too complicated for me since i am under time pressure and this algorithm can't handle loops.
Are there any other ways already implemented?
I have to reduce skeleton to features which would consist of Branch points, end points and a few points i will describe.

⋮
Radek, please attach your binary image, and your skeletonization of it so we can see what you're talking about.

⋮
I am sorry for not attaching it the first time.
This is one of the usual scenarios:
On the skeleton are few branchpoints. Algorithm i am refering to removes "hair".

in the second image you can notice that there are only three branches. The shortest one is the matter of the subject - it is redundant. This is almost perfect image, so with blurry edges there might be much more of these branches. Even bigger letters mean more troubles with this. 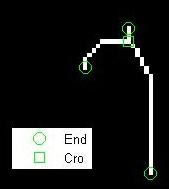 ⋮
Thank you very much, I appreciate you time and effort.

⋮
And to make myself sure, I rather add original image 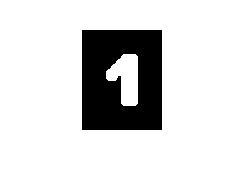 Brett Shoelson on 15 May 2015
⋮
Edited: Brett Shoelson on 18 May 2015
Hi Radek, I have some thoughts to share that might be useful. First, recognize that you get different output from infinite thinning than from infinite skeletonization. (bwmorph(bw, 'skeleton', Inf) vs bwmorph(bw, 'thin', Inf) ), and that the latter might give you a better starting point for your training. (You might not even have spurs to worry about.)
Second, regardless of which thinning approach you start with, if you calculate a bwdistgeodesic transform on your thinned bw image--using a mask that is true at all of the endpoints and false elsewhere--the longest constrained path will be the one that contains the maximum value in transformed image. You can reconstruct that spur-less path by tracing along that path, keeping only largest neighbors. (Spurs will necessarily have smaller distance values.) 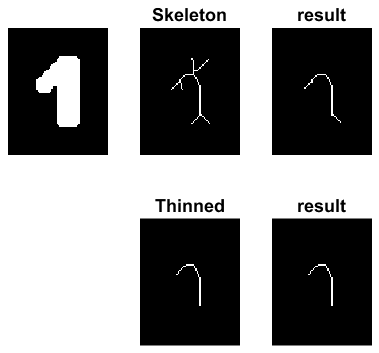 I have attached a bit of code that will recreate that path from the original binary image. It runs (including the thinning) on the screen capture of your image of a "one" in about 2 msec.
Cheers, Brett

⋮
Hi Brett, thank you very much for your cooperation. I tried to use your method, which is very good for simple characters as the one above, but when i used it for looped numbers (0,6,4,8,9), there is selected only part of the loop like this: Often it is also confused by short distance between two brachpoints like this: I am also posting original pictures for your consideration.
Are there any ways i can change this method to solve these issues? Brett Shoelson on 5 Jun 2015
⋮
Radek: yes, the longest-constrained-path approach I gave you is indeed confounded by loops. On the other hand, did you try infinite thinning instead of infinite skeletonization? I think it might just give you what you're looking for without any subsequent morphological manipulations. Brett

⋮
Thank you Brett! Your solution was in the end what i was looking for.