Vaibhav on 2 Dec 2022
⋮
Edited: DGM on 6 Dec 2022
Hello everyone!
I have been working with images recently for my college project and everytime I try to import a coloured image, the image turns out as black and white. I did see some other codes to deal with this but it hasn't worked.
Can someone explain what I am doing wrong?
Thanks!

⋮
Ran in:
Not without seeing the code and the image. The image probably isn't what you think it is, or you're displaying it with the wrong code. For example this works fine:
rgbImage = imread('peppers.png');
imshow(rgbImage); 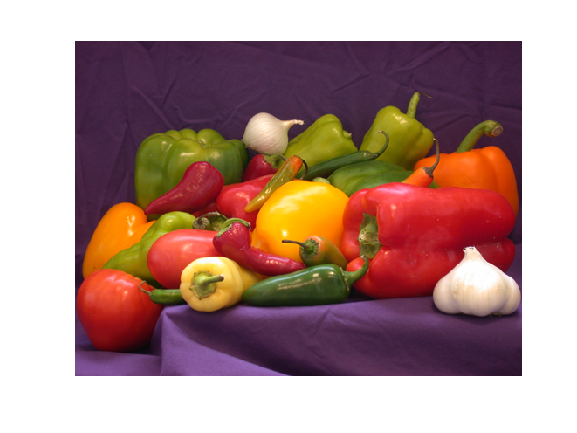 If you have any more questions, then attach your data and code to read it in with the paperclip icon after you read this:
TUTORIAL: How to ask a question (on Answers) and get a fast answer

Gokul Nath S J on 5 Dec 2022
⋮
Hi Vaibhav,
There is a possibility that your image might be in grayscale. Kindly check the dimension of the image matrix (img) imported after the following command.
img = imread(‘image.jpg’);
Please check whether there is any third dimension in the img matrix.
It would be helpful if you can share the code along with the image for further clarification.

Image Analyst on 5 Dec 2022
⋮
Is your colored image floating point with values outside the range of 0 to 1? If so everything 1 or larger will show up as white. Again, attach your image with the paperclip icon.

DGM on 6 Dec 2022
⋮
Edited: DGM on 6 Dec 2022
Ran in:
@Image Analyst is right. The easiest way to know what's wrong is to attach an example of the image in question and show how you're trying to read it.
Since we're guessing, I'm going to place my bet as well. I'm going to guess that it's an indexed image. If the image is indexed color, then you need to read the corresponding map as well and use it throughout whatever you do with the image.
[inpict map] = imread('canoe.tif'); % an indexed color image
imshow(inpict) % the index array is a 2D array and will be rendered as grayscale 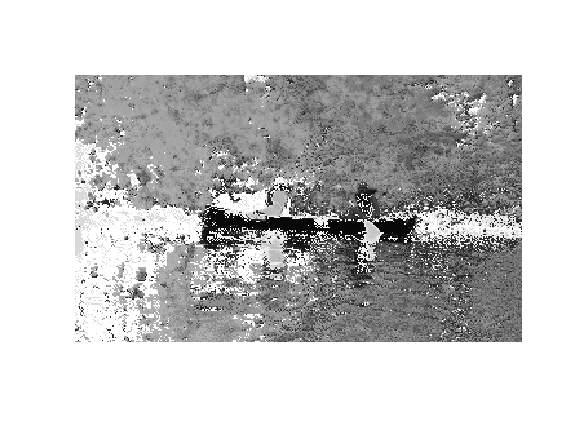 imshow(inpict,map) % for the image to be rendered in color, a nondefault map is needed 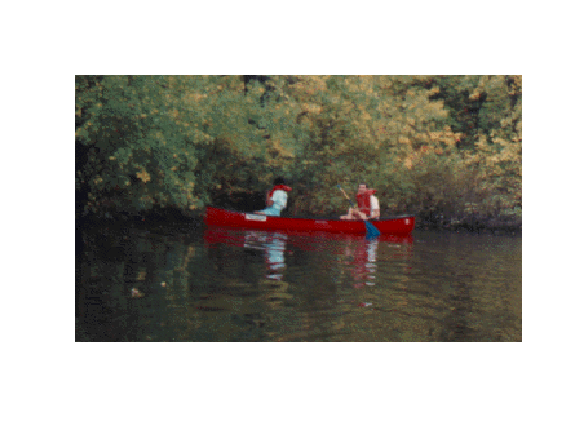 This also demonstrates the problem with assuming that 2D images are grayscale. Request both outputs from imread() and check the map argument. If the map is empty, you can probably assume it's grayscale.
That said, there are plenty of other possible problems that can't be revealed by providing an example image. For example, you might be doing something like:
inpict = imread('peppers.png'); % an actual RGB image
roirangex = 100:200; % let's say we wanted to do some sort of indexing into it
roirangey = 100:200;
imshow(inpict(roirangey,roirangex,:)) % display a region of interest 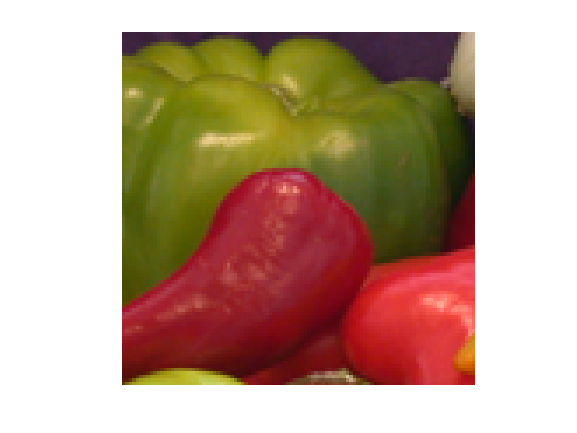 In this case, the image is being read as color just fine, but if you had made a tiny abbreviation to the indexing expression by accident, you would get this instead:
imshow(inpict(roirangey,roirangex)) % display a region of interest (red channel only) 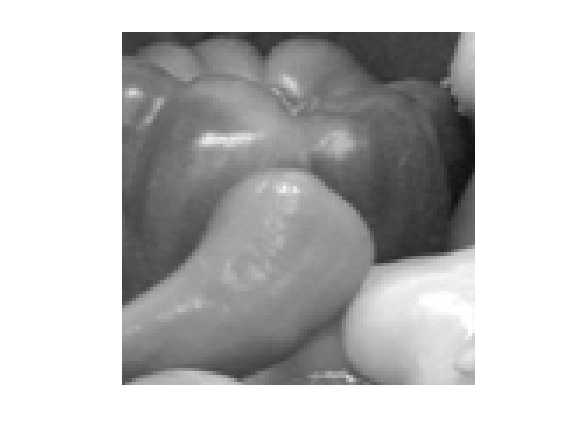 Note how dissimilar our suggestions are. That's how conversations struggle with poor specificity.

⋮
Ran in:
"If the map is empty, you can probably assume it's grayscale." <= or color
[inPicture, cMap] = imread('peppers.png'); % Read RGB image
% Let's check out what the returned colormap is:
whos cMap
Name Size Bytes Class Attributes cMap 0x0 0 double
isempty(cMap)
ans = logical
1
For unknown inputs, I use this code in my programs
[imageArray, colorMap] = imread(imageFullFileName);
[rows, columns, numberOfColorChannels] = size(imageArray);
% Tell user the type of image it is.
if numberOfColorChannels == 3
colorbar 'off'; % get rid of colorbar.
txtInfo = sprintf('%s\nThis is a true color, RGB image.', txtInfo);
elseif numberOfColorChannels == 1 && isempty(colorMap)
colorbar 'off'; % get rid of colorbar.
txtInfo = sprintf('%s\nThis is a gray scale image, with no stored color map.', txtInfo);
elseif numberOfColorChannels == 1 && ~isempty(colorMap)
txtInfo = sprintf('%s\nThis is an indexed image. It has one "value" channel with a stored color map that is used to pseudocolor it.', txtInfo);
colormap(colorMap);
whos colorMap;
%fprintf('About to apply the colormap...\n');
% Thanks to Jeff Mather at the Mathworks to helping to get this working for an indexed image.
colorbar('peer', handles.axesImage);
%fprintf('Done applying the colormap.\n');
end

⋮
Edited: DGM on 6 Dec 2022
Note that the statement was referring to 2D images. If the incoming image is single-channel and the map is empty, it's probably grayscale/binary.
Note also that this syntax:
[imageArray, colorMap] = imread(imageFullFileName);
can still allow imageArray to be MxNx4 or to be MxNxCxF. In the latter case, if F is greater than 1, this usage
[rows, columns, numberOfColorChannels] = size(imageArray);
will return the wrong number of channels.

⋮
Yeah, I was just referring to what I personally do in the case of unknown images. If you know for a fact that the image is 2-D (grayscale or indexed) then you don't need to check for the number of color channels. But many people don't know, and we've all seen cases where people see a gray scale image thumbnail in File Explorer and assume that it's 2-D grayscale and not 3-D RGB. So when they do
[rows, columns] = size(grayImage);
they get the wrong number of columns. For those who don't know why (not referring to you DGM) you can look at Steve's blog:
Too much information about the size function | Steve on Image Processing
So just to be sure I always ask for the third return argument from size and check that it's either 1 or 3.
I never use imread with multiple image planes/slices. If it's known to be a video or a multipage TIFF image, I use read, or if it's a hyperspectral image there is a hyperspectral add-on package that someone might want to look into (from the Add-ons Explorer on the Tool Ribbon).
What kind of non-video image would have F greater than 1? (Maybe attach one.) But if you knew for a fact that it was you could do
[rows, columns, numberOfColorChannels, F] = size(imageArray);
or to be 100% general for multidimensional arrays
theSize = size(imageArray);
Anyway, thanks for your always thorough answers. They go above and beyond what most people do.
P.S. I'm still digesting Steve's answer in the other thread about how colormaps work. I may work up a demo that illustrates the subtle difference.

⋮
Edited: DGM on 6 Dec 2022
Ran in:
I know. I just work with a lot of transparent images myself. Depending on the format and how it's written, you might end up with the alpha content being returned as the third output, or it might be attached to the first output instead, so imageArray may have 1,2,3, or 4 channels, and alpha might be empty even when the image has alpha content.
[inpict map alpha] = imread('cmanrgba.tif.txt'); % RGBA
size(inpict)
ans = 1×3
256 256 4
size(alpha)
ans = 1×2
0 0
[inpict map alpha] = imread('cmanrgba.png'); % RGB + A
size(inpict)
ans = 1×3
256 256 3
size(alpha)
ans = 1×2
256 256
I don't do anything with video files proper, but I used to use a lot of multiframe GIFs. It's easy enough to get a 4D array out of imread() if the input is a multiframe GIF (extant imread() bugs notwithstanding). CUR/ICO/HDF/TIFF files can also be multiframe, but off the top of my head, I don't think there's a simple syntax to dump all frames into a single array with one call to imread(). I know imread() also supports multiframe PGM/PBM/PPM, but I don't have any examples with which I can test the behavior, and imwrite() can't create one, so I'm going to assume it'll be similar to TIFF.
What I almost never use (except for forum tasks) are indexed images other than GIF. For GIF, I don't use imread() (at least not directly).
I know you've already seen my other comment on size(). I often avoid size(), but if I have to use it without dimensionality contraints, I'd discard the last output. That said, it's not like imread() can return a 5D array ... at least I don't think it can.