Use MATLAB and Simulink for Model-Based Design to model and simulate the controller, generate production code, and streamline compliance certification

“Modeling, simulating, and implementing the ventilator’s embedded software with Simulink greatly simplified compliance certification. The model helped ensure a structured development process and provided thorough documentation and a visual representation of the system for the certification review.” 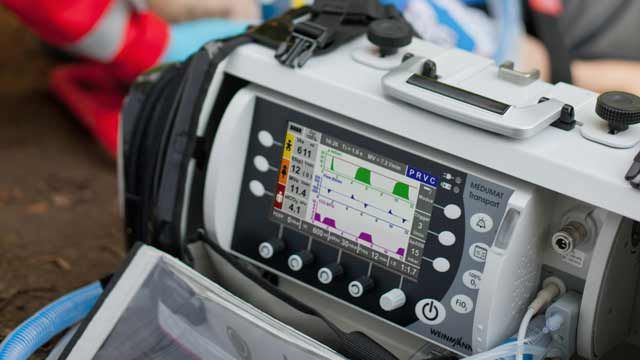 The MEDUMAT Transport ventilator moves a mixture of oxygen and air into and out of the lungs of patients who require breathing support. Developed by Weinmann Medical Technology, MEDUMAT Transport is designed for use in emergency care and during transport for intrahospital or interhospital transfers. As an emergency medical device deployed in a wide range of operating conditions, the MEDUMAT Transport must be portable, versatile, and exceptionally reliable.

“MEDUMAT is orders of magnitude more complex than earlier ventilators that we have developed,” says Dr. Florian Dietz, head of predevelopment emergency medicine at Weinmann. “Model-Based Design with MATLAB and Simulink enabled us to handle the increased complexity, and it was instrumental in our achieving compliance certification. Working with models instead of handwritten code makes the embedded software easier to maintain and reuse, and helps us explain the technology to a certification authority.”

MEDUMAT Transport has a variety of sensors to measure pressure, flow, temperature, and molar mass (used to measure oxygen concentration). These sensors, combined with advanced pneumatics and electromagnetic valves, make MEDUMAT Transport the most advanced—and the most complex—ventilator that Weinmann has ever developed. Weinmann engineers recognized that their traditional process, in which embedded software was hand coded, was not feasible for this project. “Compliance certification would be extremely complex if the code were all handwritten, because we would have no way to demonstrate the whole system,” says Dietz. “Maintenance, too, would be a challenge because it’s a huge effort for a colleague to understand so many lines of code without extensive documentation.” In addition to developing embedded software for the device’s 16-bit Infineon ® XC161CJ microcontroller (MCU), Weinmann engineers needed to develop a subsystem that used a Texas Instruments™ TMS320C2810™ MCU to process signals from a flow sensor positioned near the patient’s endotracheal tube. To find the optimal algorithms for this system, the engineers needed to evaluate numerous design alternatives.

Weinmann used MATLAB and Simulink to model, simulate, and help verify the embedded software for MEDUMAT Transport and to simplify the compliance certification process.

Weinmann engineers developed a Simulink plant model, which included hardware components as well as a mechanical model of human lungs.

The team used Simulink and Stateflow® to model the controller and its state machines, including one state machine that tracks standby, startup, shutdown, and other operating modes and a second that manages the entire ventilation process.

The system-level controller model served as the top level in a hierarchy of subsystems, which were also modeled in Simulink, supporting the fundamental requirement for a modular software design and architecture.

After developing and simulating the design as a floating-point model, the engineers used Fixed-Point Designer™ to convert it to fixed point for deployment to the 16-bit MCU.

In parallel with the MCU development, the engineers used DSP System Toolbox™ to develop digital filters and algorithms for the proximal flow sensor that calculates the gas flow velocity to the patient.

After running closed-loop simulations of the controller and plant in Simulink, the team used Embedded Coder® to generate production code for the control system and the sensor signal processing subsystem. They deployed the code to the Infineon and TI MCUs, respectively.

Most safety standards now explicitly require or recommend the use of Model-Based Design. As a result, Weinman will leverage its investment in MATLAB and Simulink on future projects requiring certification.

MEDUMAT Transport is now in production and in use by medical personnel in Europe, Asia, and Australia.