Predict diabetes risk by quantifying asymmetry between pairs of fingerprints

“When I want to pound a nail, I don’t want to begin by forging the hammer. That’s the value that MATLAB provides. You don’t have to start from scratch or be an expert programmer. I’m a biologist, but with MATLAB I was able to quickly implement very complex analysis techniques in a matter of days.” 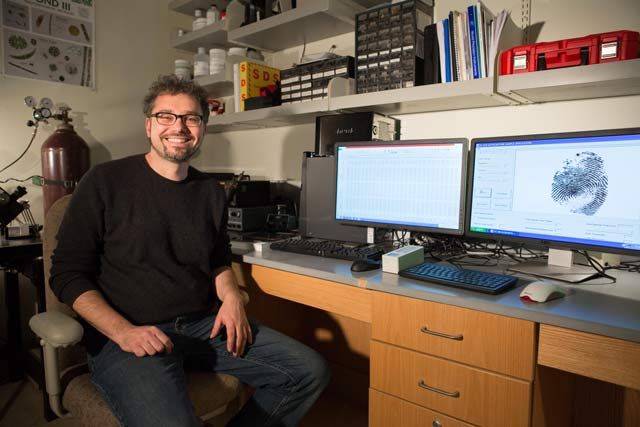 For one-third of people with type 2 diabetes, complications have already set in by the time they are diagnosed. With early diagnosis, these complications could be delayed or even prevented through lifestyle interventions such as proper nutrition and regular exercise. Unfortunately, however, the initial diagnosis typically occurs well into the patient’s adulthood, after the disease has already caused harm. Genetic testing enables early diagnosis, but it is far too expensive for most patients to contemplate.

A team of researchers from Longwood University, Ohio University, and Touro University California have developed a novel, low-cost approach to early prediction of type 2 diabetes. This approach is based on measuring fluctuating asymmetry (FA), the small, random deviations from perfect symmetry in bilaterally paired structures such as fingerprints from the same fingers on opposing hands. Dr. Bjoern Ludwar, assistant professor at Longwood University, developed MATLAB® algorithms that apply wavelet analysis to quantify this asymmetry. The pilot study found a significant correlation between fingerprint FA scores and type 2 diabetes.

“When we began the study, we didn’t know what method for evaluating asymmetry would work best, or whether we would find any correlation at all,” says Ludwar. “We were working on a complex problem with lots of unknowns. MATLAB enabled us to rapidly try different approaches and techniques without spending months implementing my own wavelet operations or basic library functions.”

A previous study of fingerprint asymmetry and diabetes propensity compared the number of fingerprint ridges on opposing fingers. This study was limited by the lack of dynamic range in the data, as most ridge counts differed by less than 20.

Dr. Ludwar and his colleagues wanted to augment traditional fingerprint analysis with modern practices. Specifically, they wanted to capture all the information available in the fingerprint—including features such as whorls, loops, and arches—in a single vector. They needed to experiment with several wavelet analysis techniques to identify the best one for accomplishing this goal.

Initially, the group did not know whether using fingerprint FA as a predictor for diabetes was a valid approach. With a limited budget for the pilot study, the group could not afford to spend months finding out.

Dr. Ludwar used MATLAB and Wavelet Toolbox™ to develop the algorithms for measuring fluctuating asymmetry used in the pilot study.

Fingerprint scans were taken from 340 patients, 257 of whom had been diagnosed with diabetes. The remaining 83 patients in the control group had no sign of diabetes and no family history of the disease.

Dr. Ludwar cropped uncompressed bitmaps of the fingerprint scans to 256x256 pixel images and imported them into MATLAB.

Working in MATLAB with Wavelet Toolbox, he experimented with various wavelet decompositions on a test set of images. He evaluated the effect of different fingerprint orientations to verify that the rotation of the fingerprint did not significantly affect the asymmetry analysis and calculations.

Based on these evaluations, Dr. Ludwar selected a Haar wavelet transform. In MATLAB he applied this transform to every fingerprint scan in the full set to obtain a 36-element feature vector for each one.

He then calculated the Euclidian distance between the feature vectors for opposing fingers. Five distance values—one for each pair of fingers—were calculated for each of the 340 patients. These values represented the computed FA of the patient’s fingerprints.

Dr. Ludwar passed his results to his research colleagues, who used them to perform multinomial logistic regressions, controlling for age and gender. The researchers found that asymmetry scores could predict diabetes risk, and identified the fingers that were the most predictive.

The group is currently preparing for a larger study to confirm the results. For this study, Dr. Ludwar plans to further optimize the wavelet analysis in MATLAB to maximize predictive accuracy. He and his team hope to develop a cell phone app that reads scanned-in fingerprints. 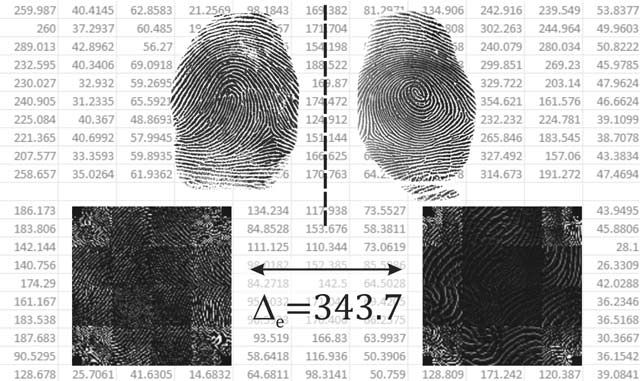