“Our Simulink models serve as a single, cohesive source of our design—including documentation and implementation—which lowers costs and makes changes easier to implement. As we add more automated tests, we reduce certification costs, as well.” 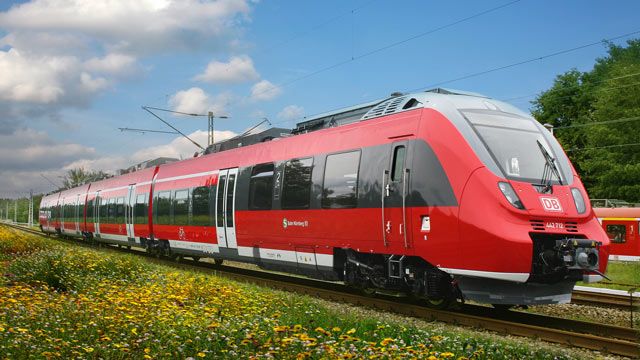 New designs for light rail, metro, commuter, intercity, locomotives, and high-speed trains must meet the specific needs of the cities or regions the vehicles will serve. In addition, software systems for these vehicles must comply with local and country-specific regulations, as well as with industry standards such as EN 50128 and EN 50657.

In the rail transportation industry, system tests often cannot be performed until a complete vehicle is built and on tracks. Discovering a missing requirement or a misunderstanding in requirements at this phase is exceptionally costly. Engineers at Alstom, formerly Bombardier Transportation, shortened lead times and reduced development costs for the company’s MITRAC propulsion and control systems by adopting Model-Based Design with MATLAB® and Simulink®.

“With Model-Based Design, we validate customer requirements and our designs much earlier, which enables us to reduce risk and shorten lead times by 35% or more,” says Claes Lindskog, manager of propulsion control, platform development at Bombardier Transportation. “Generating embedded code from our models enables us to merge design and implementation teams, minimizing delays and further reducing lead times.”

Before they adopted Model-Based Design, Bombardier followed a traditional waterfall workflow for control software development: One team was responsible for the requirements and design, which would be handed off to a second team for implementation via traditional hand coding, which is both manual and error prone. Most testing was done in a hardware-in-the-loop environment followed by a combined hardware/software system test, and some tests had to be conducted on the train itself. If errors are discovered late in this process, it can lead to weeks or even months of costly rework and delays.

Bombardier needed an approach that would enable them to avoid project delays and cost overruns due to ambiguous requirements, complex standards, and the inability to test designs until late in the development process.

Recognizing that adopting a new methodology would be organizationally challenging, they wanted to smooth the transition by providing engineering teams with appropriate support.

Bombardier adopted Model-Based Design and worked with MathWorks to facilitate the transition to the new development approach.

Bombardier engineering teams attended seminars conducted by MathWorks engineers that focused on detecting and correcting design errors through simulation. Following these sessions, Bombardier engineers worked with MathWorks support on a pilot to demonstrate the concept in an actual customer delivery project.

In one instance, the team created an electrical and control system model in MATLAB and Simulink. By simulating the model, they identified an electrical fault that typically would not have been found until a combined system test. The success of the modeling, which had an ROI of more than 100%, helped reduce organizational resistance to the new development approach.

They generate C code from their controller models using Embedded Coder®. After compiling the code and deploying it to an embedded target, they run hardware-in-the-loop (HIL) tests to verify the real-time operation of the software. HIL tests are followed by tests on propulsion hardware in the lab and then on the actual train.

Bombardier engineers are working to extend their workflow to include software-in-the-loop (SIL) and processor-in-the-loop (PIL) testing and use of IEC Certification Kit to streamline EN 50128/EN 50657 certification.