How to add or fix a spring in simscape Multibody?

Nayla on 15 Mar 2021
⋮
Commented: Nayla on 1 Apr 2021
Accepted Answer: Juan Sagarduy
I created a suspension assembly in Solidworks and exported it to Simscape Mulibody. The exported Assembly has now an automatic generated block diagramm that has errors since its not working.(see picture). To make a difference i added a prismatic joint between piston and cylinder.
For now, i have simplified the assembly and i am limiting myself to the spring damper only.
I created a spring (for the spring damper) with its cylinder and piston but when i run the simulation in simscape, the spring is not moving along with the piston and just fall into the depth. I thought maybe i could use a joint or something else to add a spring to the assembly or delete it to create a spring in simscape but this is not really easy when you dont know which spring to use (rotational, translational spring, spring and damper force, etc).
I also managed to make the piston move in one direction but it should be oscillating and not just move in one direction, so it can adapt its movement with the wheel. Which parameter do i have to use to make it work, which joint do i have to use?
Any help would be greatly appreciated, even if it's just an explanation of why this isn't working the way I expected. Thanks in advance. 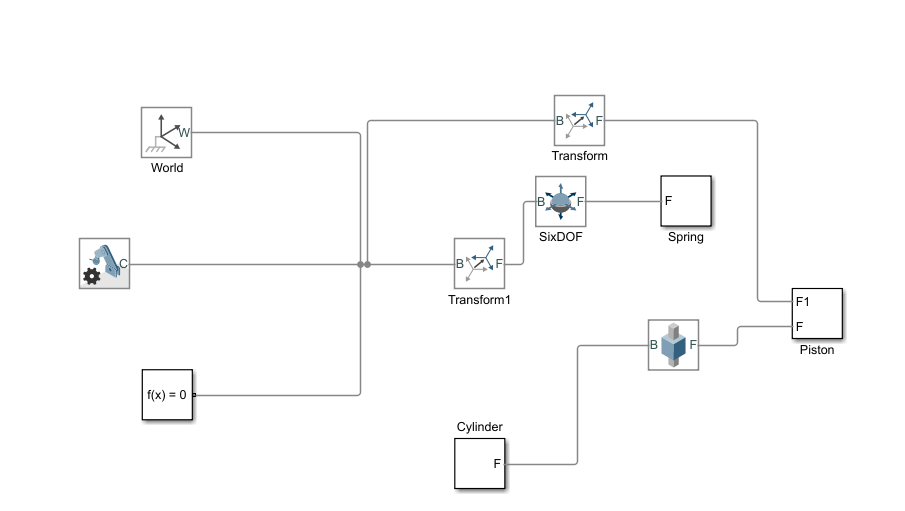 Juan Sagarduy on 31 Mar 2021
⋮
Hi there
Please check the link Interface between mechanical translational networks and Simscape Multibody joints - MATLAB (mathworks.com). Basically you need to integrate the spring-damper (suspension) with the prismatic joint in your mechanism as shown in this example.
Best of Luck / Juan

⋮
Hi,
Thank you very much for the answer. I will definitely try it .
Thanks again.