Reinder Dorman on 10 Mar 2021
⋮
Commented: Reinder Dorman on 18 Mar 2021
Hi All,
I've seen this behavior, actually, my entire matlabbing live, but i've never thought about it twice until today (because it became a bit annoying).
Sometimes, when I'm debugging, and want to exit debugmode, it doesn't exit debugmode immediately when giving dbquit command. I think this probably has to do with debugging in nested functions or executing other commands in between, and the dbstop command being turned on? I'm not sure.
However, on some occassions, I really have to execute dbquit about ten or more times ('arrow up, enter, arrow up, arrow up, enter). This has happened to me on many occassions.
Today, this seemed to happen while it stopped in debugmode on a particularly line that takes a sec's to compute (input parsing). I noticed that, when trying to exit debugmode, it takes a while before it stops being "busy" and is again in debug mode, approximatly the same time this line would normally take (rough estimate, could be a coincidence). This makes me think that, after dbquit matlab is trying to execute this line again, catches and error or find the breakpoint, and stops in dbmode again.
I hope this makes some sense. Anyone have some experiences like this as well? Not sure if this would be a bug, or weird combination of debug-things i'm using (i.e. dbstop).
PFA bonus image of dbquit not doing anything 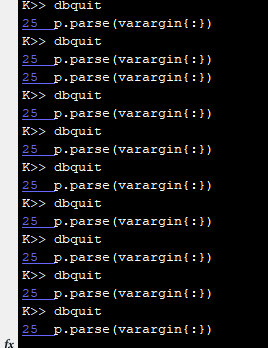 Walter Roberson on 16 Mar 2021
⋮
dbquit('all') ends debugging for all files at once.
(Requires a somewhat new MATLAB release.)
However... in practice:
If dbquit all does not work, then clear dbstop if error, dbstop if caught error, dbstop if warning, and dbstop if naninf . These will not always be enough, but they help .

⋮
I think your third point might be relevant in my case, because this is in a bunch of plotting scripts. I'm also not sure that this is a bug but just a consequence of my workflow at the moment. That's why I think dbquit('all') is a good thing to try when I encounter this again!
(I'll accept this answer when i've got a chance to test this again)