Alex Travis on 25 Aug 2020
⋮
Edited: dpb on 27 Aug 2020
I have a data set in table format in which all columns have a single entry (type double) except for a few columns that have type cell (but still only a single entry).
I'm trying to manipulate this data, but before I do I need to reformat the 'cell' columns from type cell into type double to match the rest of the data. This process needs to be generic enough to convert the whole table into the same data format no matter which columns are which data type.
I was thinking about doing some loop like:
for i = 1:size(table)
column(i) = 'thing that converts a vector of cells into same size vector of doubles'
end
Any help is appreciated

⋮
Hey, thanks for the reply. I managed to solve my problem by using the readtable import option 'TreatAsEmpty' and then entering the errant string that was messing up my import. I hope that solves all the problems with this code, but I haven't tried running my code on other spreadsheets yet so I'm not sure this specific fix will solve all my problems downstream.
When I get a chance I'll try your fix to see if it solves the problem generically.

⋮
Hmm, got an error with your code, but I'm not entirely sure what it's doing so unsure how to troubleshoot:
Brace indexing is not supported for variables of this type.
Error in cell2mat (line 42)
cellclass = class(c{1});
Error in TESTESTEST (line 28)
CSVFile.(CSVFile.Properties.VariableNames{2})=cell2mat(CSVFile{:,2});

⋮
Hey, thanks for the reply. So the CSV files I'm trying to import are autogenerated by another program. Basically the CSVs are a giant matrix of numbers, but occasionally one of the cells has a word in it (see example below). When a single cell has a word, it seems that 'readtable' turns the whole column into data type 'cell'.
Here's the good news, I have code further down stream that eliminates these cells with words from my data set (as I only really need a subset of this data that will never have words in it. However, some of the data I do need has already been turned into cells at this point. Also, I want to have the entire data set for other purposes.
Example table: 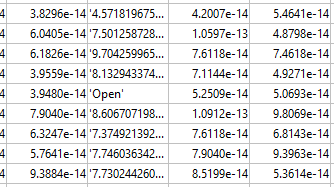 Thanks again for your help

⋮
"When a single cell has a word, ... 'readtable' turns the whole column into data type 'cell'."
Yes...it really has no choice; a column has to be a homogenous type and since the string can't be converted, the option would be to not return the column at all or return it but as a cell array.
However, you should be in luck -- use the import options object with the 'ImportErrorRule','fill' and the 'FillValue','NaN'. This is the default combination but you have to use the import options object to bring it into play, readtable on its own doesn't go the extra mile.
opt=detectimportoption('yourfile.csv');
t=readtable('yourfile.csv',opt);
I just happened to have a suitable test file on hand from an Answers Q? of days of yore:
>> type ziad.txt
1 3 5 6 temp 56 d 3
4 f 45 5 6 H 4 5
>>
has some character data scattered around amongst the numeric values as does your file..
opt=detectImportOptions('ziad.txt');
t=readtable('ziad.txt',opt);
gives
>> t
t =
2×8 table
Var1 Var2 Var3 Var4 Var5 Var6 Var7 Var8
____ ____ ____ ____ ____ ____ ____ ____
1 3 5 6 NaN 56 NaN 3
4 NaN 45 5 6 NaN 4 5
>>
where the string data locations are now NaN but all variables are numeric.
Moral: It pays to read the See Also section of the documentation! :)
ADDENDUM: Depending on the location and number of strings in the input file, it is possible that detectImportOptions will decide a given column is character data instead of numeric. This can/will happen if the first several records for the variable happen to be character data instead of numeric.
So, for generic solution, you will want to ensure the identified variable types are double for all columns in the import options object.
Also NB: you can create one of these import objects that matches the file format and save it as a .mat file and reload/reuse it for any file of the form...it will need to match the number of columns so if you have files with differing numbers of of variables, you'll need one consistent with the file. But, you don't have to call and cleanup the object for every file if you have a series of similar files.