Bill Tubbs on 30 Sep 2022
⋮
Edited: Bill Tubbs on 30 Sep 2022
Accepted Answer: Bill Tubbs
I'm running an MPC in Simulink that was defined in a matlab script using the MPC Controller block and I want to inspect the state estimates of the observer which is the default input disturbance observer defined as follows:
setindist(mpcobj,'integrators');
The MPC model has 20 states:
>> size(mpcobj)
MPC controller with 4 measured output(s), 0 unmeasured output(s),
3 manipulated input(s), 0 measured disturbance(s), 3 unmeasured disturbance(s)
I wanted to check the state estimates so I selected the option to include them as an output.
However, the size of the state estimates vector is 24.
>> size(out.X_EST)
ans =
1501 24
I want to compute the estimated outputs (x3), so I need the C matrix for the observer model, which must be 3 x 24 presumably.
Whereas, the size of the plant model C matrix is 4 x 20:
>> size(mpcobj.Model.Plant.C)
ans =
4 20
What are the extra 4 states of the estimator and how do I compute the estimated outputs from these?

Bill Tubbs on 30 Sep 2022
⋮
Edited: Bill Tubbs on 30 Sep 2022
I figured out that you can use the following to get all the parameters of the Kalman Filter including the augmented model used by the observer:
>> [L, M, A, Cm, Bu, Bv, Dvm] = getEstimator(mpcobj);
>> Cm * out.X_EST(end, :)'
ans =
6.8182
2.2083
1.2348
0.0001
Can I get this Cm matrix in simulink so I can calculate the output estimates during the simulation?
I couldn't find a way so I used a from-workspace block to get the precalculated Cm matrix and used it to copmute the output estimates like this. If anyone knows a simpler way, please let me know! 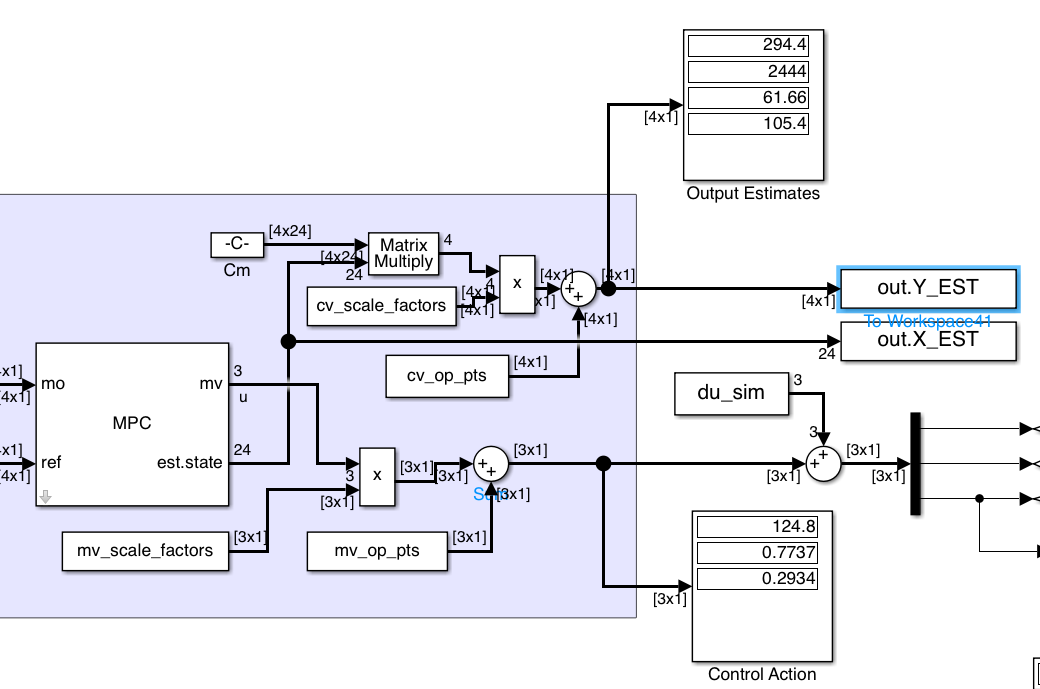