Siva on 3 Jun 2022
⋮
Commented: Paul on 6 Jun 2022
Accepted Answer: Jon
Ran in:
For the transfer function HzPw attached, I am not getting the behavior I expect from the function isPassive and hinfnorm. Any suggestions on what I am interpreting incorrectly would be much appreciated.
load HzPw.mat;
nopt = nyquistoptions;
nopt.XLim = [-5e-3 2e-2];
nyquistplot(HzPw, nopt); 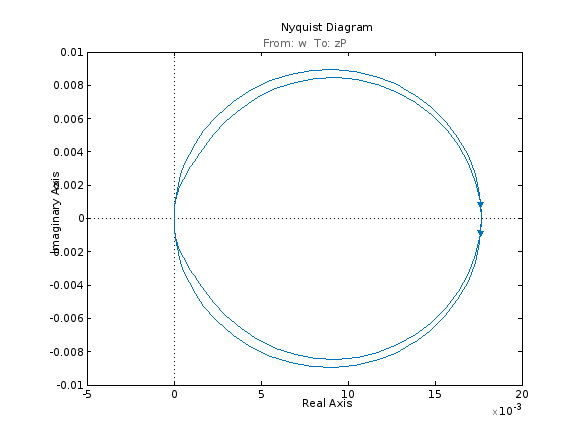 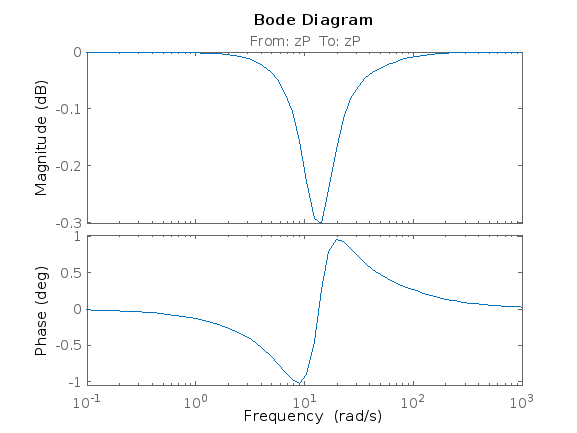 norm of this to be 1. Indeed, by my thinking, the transfer function is passive, and so the scattering function

norm should be ≤ 1. However,
hinfnorm(Hscat)
ans = Inf
I am wondering what I am not thinking about correctly.
Thank you.

⋮
Actually, that unstable pole is at s = 0.36, not 0.0036.
Looks like there are some other near cancellations as well, like at -0.31 + 1j*.36.
I wonder how HzPw was constructed, myabe by "transfer function math" that can introduce some additional poles that aren't really in the system .. more info needed from @Siva

⋮
Ran in:
Thank you @Jon and @Paul. I had missed HzPw having an unstable pole, and the near pole-zero cancellation.
Following up, I did
load HzPw.mat;
HzPw_reduced = minreal(HzPw,3e-2);
bode(HzPw, HzPw_reduced) 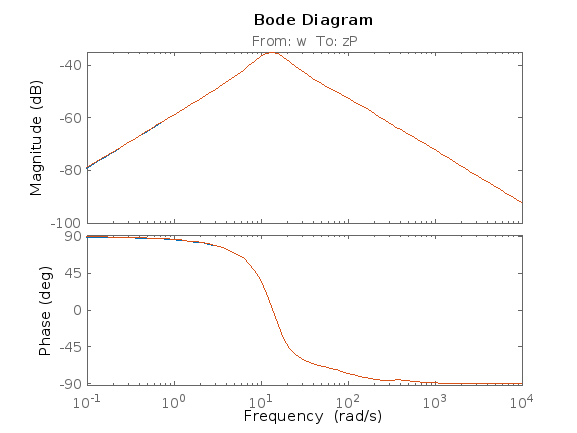 norm = 1.
Hscat_reduced = (1-HzPw_reduced)/(1+HzPw_reduced);
hinfnorm(Hscat_reduced)
ans = 1
HzPw is a product of using systune. I am doing an optimal control calculation with a tuanbleTF in the model. I was trying to apply a TuningGoal.Passivity constraint on HzPw, but was unable to, even though it ended up looking passive. That is what led me to this line of exploration. I can post a minimal version of the systune calculation, or perhaps that would better belong in a different thread?
I am guessing I have to scale my problem better before passing it off to systune to avoid issues like near cancellations of unstable poles and zeros?
In fact, I can reduce the order even further without changing the dynamics much.
HzPw_reduced2 = minreal(HzPw,5e-2);
bode(HzPw, HzPw_reduced2) 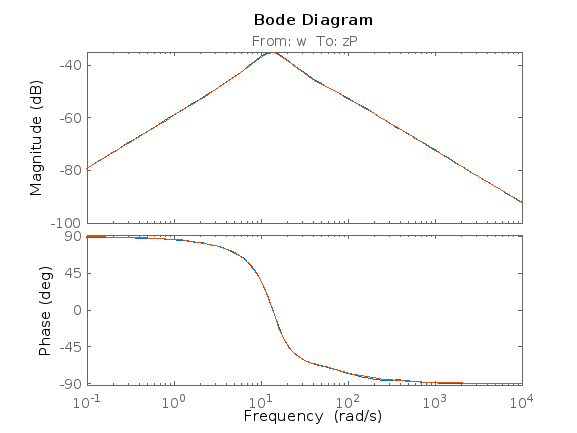 Maybe this does point to poor conditioning?

⋮
@Siva
Does "product of using systune" mean HzPw is the output, CL, of systune() evaluated at the tuned parameters?
How was CL0, the input to systune() constructed? Using interconnection functions, like feedback(G,1), or using transfer function algebra, like G/(1 + G)?

⋮
@Paul Yes, HzPw is part of the output, CL, of systune evaluated at the tuned parameters. I get HzPw as
HzPw = tf(getIOtransfer(CL,'w','zP'));
CL0 was constructed using transfer function blocks, sumblks and the connect() function.
I am not sure if this uses transfer function algebra.
One thing I realized in the meanwhile is that my tunableTF had degree 5 numerator and denominator polynomials. If I instead used degree 2 polynomials, I get the same same HzPw as if I used the (5,5) tuableTF and then constructed a minimum realization. The additional degrees of freedom I had for tuning probably led to the near pole-zero cancellations.

⋮
Using connect() is the right approach. Of course, there could still be pole/zero cancellations depending on the blocks in the model, but that's different than what can happen using transfer function algebra.

⋮
Ran in:
Another thing to keep in mind is that it looks like isPassive only checks the poles, and does not account for pole/zero cancellations
isPassive(zpk([],-1,1))
ans = logical
1
isPassive(zpk(1,[-1 1],1))
ans = logical
0
Of course, checking for pole/zero cancelations can be a tricky business, so it's understandable tht isPassive() takes no action on its own in this regard, but it's something to bear in mind as the user.

⋮
@Paul Thank you.
I am curious how transfer function algebra and functions like connect() and feedback() are implemented differently in MATLAB.
It makes sense that isPassive() returns false for the transfer function with the unstable pole-zero cancellation, since it likely uses a state space based algorithm and the state space representations of the two transfer functions are different. However, this raises the following question for me. In the documentation for isPassive, it says, "Equivalently, a system is passive if its frequency response is positive real, ...". Should that be, "... if it is internally stable and its frequency response is positive real ..."?

⋮
@Paul That is a great example. That clarifies all of my current questions. Thank you @Paul and @Jon.

⋮
Just ran into this, related to the discussion in this thread.

⋮
This link might also be of interest, though I disagree with the "guarantee" in the very last sentence on that page, which is clearly incorrect as shown above.

Paul on 3 Jun 2022
⋮
Ran in:
Hi Siva,
I'm not able to load the .mat file, so can't really look at the problem.
load('https://www.mathworks.com/matlabcentral/answers/uploaded_files/1020880/HzPw.mat');
Error using load
Unable to read file 'https://www.mathworks.com/matlabcentral/answers/uploaded_files/1020880/HzPw.mat'. If it is a Version 7 or earlier MAT-file, consider saving your data afresh in Version 7.3
MAT-files to access it from a remote location.
Can you save in v7.3 format and upload, or, if simple enough, just show what it is otherwise, like displaying the A,B,C,D or zpkdata, or the tfdata?
If not, can you post the output of the following commands:
pole(HzPw)
zero(HzPw)
pole(Hscat)
I'm asking because this doc page states "As a result, passive systems are intrinsically stable."
So maybe HzPw is not BIBO stable, but has a Nyquist plot all in the RHP, like this
h = zpk(2,1,1)
nyquist(h)
Similary, the H-infinity norm, IIRC, is not defined for unstable systems, so if Hscat is not BIBO stable, then hinfnorm will return inf as stated on hinfnorm

⋮
The OP's transfer function has a pole in the right half plane, please see my answer above

⋮
Yes, I saw your Answer after I clicked Submit.
I guess it's safe to assume that HzPw doesn't have a zero that exactly cancels that pole, though isPassive doesn't seem to care about that.
I assume Hscat also has pole in the RHP?

⋮
I think the mat file was v7.3 already, but just in case I saved explicitly with the -v7.3 option.

⋮
Ran in:
load('https://www.mathworks.com/matlabcentral/answers/uploaded_files/1021010/HzPw.mat');
Error using load
Unable to read file 'https://www.mathworks.com/matlabcentral/answers/uploaded_files/1021010/HzPw.mat'. If it is a Version 7 or earlier MAT-file, consider saving your data afresh in Version 7.3
MAT-files to access it from a remote location.
Hmm, same problem. I'm probably not using load() correctly for a remote file.