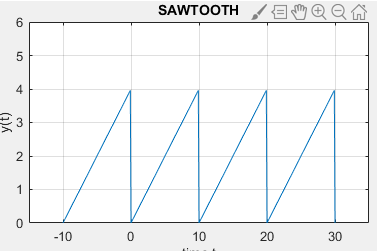 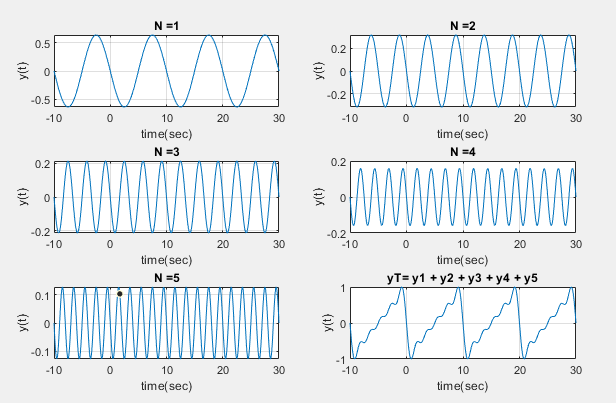 ⋮
.Hi Neptune,
I don't believe that what you are showing here so far is the Gibbs phenomenon. The wiggles you see will get smaller and smaller as the number of terms N goes up. However, there will be a permanent overshoot right where the discontinuitiy of the function is. The overshoot waveform will get narrower as N increases, but the height will remain basically the same. See the plots in Wikipedia, for example.

⋮
hello, sir.
thank for your reply on helping me with my problem..
But have you tried to run my coding that I have attached above? maybe you can help me to modify it.

David Goodmanson on 26 Nov 2019
⋮
Edited: David Goodmanson on 26 Nov 2019
Hi Neptune,
I agree that my comment on what the Gibbs phenomenon actually is was not very helpful to the actual problem at hand. The expression for the sawtooth is
A*( 1/2 - Sum((1/(pi*n))*sin(n*w0*t)) ).
where A is the double amplitude of the triangle wave, A = 4 in this case. Since the coefficients are A / (pi*n), your code is too low by a factor of 2. With the method you used, if you had included both positive and negative frequencies in the sum instead of just the positive ones, you would have got the factor of 2.
You have c0 = 2 in the code but it is not being added in successfully. Also your for loops are not exactly for loops since each set of instructions is only done once.
Making a new variable name for every value of n (dynamic variable naming) as you are doing is highly unrecommended. For one thing, if you want to do this process for, say, 100 terms, it’s just not practical. Rather than naming row vectors c1,c2 etc. it’s much better to put all the rows into a matrix and address each row with a row index. So you can do the following.
t = -10:.1:30;
wo=pi/5;
c0 = 2; % c0 = A/2
N= 5;
y = zeros(N,length(t)); % n index down, time across
for n = 1:N
cn1 = 4j/(n*pi);
y(n,:) = real(cn1*exp(1j*n*wo*t)); % drop it into the appropriate row
end
yT = c0 + sum(y); % sum down each column for the sum c1,c2,c3 ...
figure(1)
plot(t,yT);
grid on
Now to do 50 terms you just change N to 50. I hope you will agree that this is highly efficient compared to making a new variable name for every term.
If you do change N to 50 you can see the actual Gibbs phenomenon which are the spikes at y = 4.3 and y = –0.3, approximately. Those get narrower with large N, but they don’t go away. Everywhere else the fourier sum gets closer and closer to the sawtooth wave.