Detect and Measure Circular Objects in an Image

This example shows how to use imfindcircles to automatically detect circles or circular objects in an image. It also shows the use of viscircles to visualize the detected circles.

This example uses an image of round plastic chips of various colors.

Besides having plenty of circles to detect, there are a few interesting things going on in this image from a circle detection point-of-view:

imfindcircles needs a radius range to search for the circles. A quick way to find the appropriate radius range is to use the interactive tool imdistline to get an approximate estimate of the radii of various objects.

imdistline creates a draggable tool that can be moved to fit across a chip and the numbers can be read to get an approximate estimate of its radius. Most chips have radius in the range of 21-23 pixels. Use a slightly larger radius range of 20-25 pixels just to be sure. Before that remove the imdistline tool.

Call imfindcircles on this image with the search radius of [20 25] pixels. Before that, it is a good practice to ask whether the objects are brighter or darker than the background. To answer that question, look at the grayscale version of this image.

Note that the outputs centers and radii are empty, which means that no circles were found. This happens frequently because imfindcircles is a circle detector, and similar to most detectors, imfindcircles has an internal detection threshold that determines its sensitivity. In simple terms it means that the detector's confidence in a certain (circle) detection has to be greater than a certain level before it is considered a valid detection. imfindcircles has a parameter 'Sensitivity' which can be used to control this internal threshold, and consequently, the sensitivity of the algorithm. A higher 'Sensitivity' value sets the detection threshold lower and leads to detecting more circles. This is similar to the sensitivity control on the motion detectors used in home security systems.

Coming back to the chip image, it is possible that at the default sensitivity level all the circles are lower than the internal threshold, which is why no circles were detected. By default, 'Sensitivity', which is a number between 0 and 1, is set to 0.85. Increase 'Sensitivity' to 0.9.

This time imfindcircles found some circles - eight to be precise. centers contains the locations of circle centers and radii contains the estimated radii of those circles.

Step 5: Draw the Circles on the Image

The circle centers seem correctly positioned and their corresponding radii seem to match well to the actual chips. But still quite a few chips were missed. Try increasing the 'Sensitivity' even more, to 0.92.

So increasing 'Sensitivity' gets us even more circles. Plot these circles on the image again.

Step 6: Use the Second Method (Two-stage) for Finding Circles

Note that both the methods in imfindcircles find the centers and radii of the partially visible (occluded) chips accurately.

Step 7: Why are Some Circles Still Getting Missed?

The yellow chips are almost the same intensity, maybe even brighter, as compared to the background. Therefore, to detect the yellow chips, change 'ObjectPolarity' to 'bright'.

Draw the bright circles in a different color, by changing the 'Color' parameter in viscircles.

Note that three of the missing yellow chips were found, but one yellow chip is still missing. These yellow chips are hard to find because they don't stand out as well as others on this background.

Step 10: Lower the Value of 'EdgeThreshold'

Now imfindcircles finds all of the yellow ones, and a green one too. Draw these chips in blue, together with the other chips that were found earlier (with 'ObjectPolarity' set to 'dark'), in red.

All the circles are detected. A final word - it should be noted that changing the parameters to be more aggressive in detection may find more circles, but it also increases the likelihood of detecting false circles. There is a trade-off between the number of true circles that can be found (detection rate) and the number of false circles that are found with them (false alarm rate).

A modified version of this example exists on your system. Do you want to open this version instead?

No, overwrite the modified version Yes

You clicked a link that corresponds to this MATLAB command:

Run the command by entering it in the MATLAB Command Window. Web browsers do not support MATLAB commands. 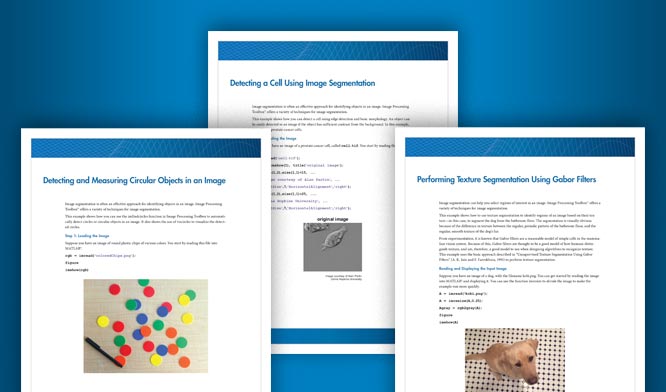