Differential Equations and Linear Algebra, 2.6b: An Example of Method of Undetermined Coefficients

This method is also successful for forces and solutions such as (at2 + bt +c) est: substitute into the equation to find a, b, c.

Then when that equation is linear, as it is here, with constant coefficients, as like the 1, minus 3, and the 2, we can always get a formula for the answer. Involves an integral. There's still one integral to do involving the impulse response. And you'll see that.

But there are few, the most beautiful, the most simple equations when the right-hand side has a special form. And that's one possibility-- t, or t squared we could deal with, or e to the t. We'll see all those. Then we know what the solution looks like.

For example-- first of all, we know the null solutions, of course. That's when this is 0. And then I just wrote for e to the st, and I find s could be 1 or s could be 2. Those are two solutions with right side 0. So we can match initial conditions. But we need a particular solution.

And that's where this one is especially simple. So the idea is to try the form we know the solution will have. So I'm going to try a particular solution. When I see a t there, I'll want a t in the particular solution. But I also need the constant term. So I'll try a plus bt.

What I mean by try is put that into the equation, match the left side and the right side, and we have a solution. And I'll just go ahead and do that. So there's several-- this video is mostly about the list of possible nice functions. And that's one of them.

OK. So if I put that into the equation, the second derivative is 0 for that. So I have minus 3. The first derivative is just b. Then I have plus 2 times y itself, which is a plus bt. So the left side of the equation is just this much. And it has to equal 4t.

Now, that's perfectly satisfied by b equal 2a equal 3, and that's the answer. Correct answer is b was 2, a was 3, and we don't have to say try anymore. We got it. Done.

Now, a different type of right-hand side we know already. What if this was e to the-- say, e to the 3t? Or e to the st. Let me put any exponent there for the moment. So now we have a different right-hand side. A very nice function. The best function of differential equations.

We can do that. That's a perfect match. The left side has the same form as the right side. I can cancel the e to the st's, and I discover that Y is 1 over s squared minus 3s plus 2. Good. That's the coefficient, 1 over that.

Let's see. I have to make two comments. One comment is that s-- we're totally golden if that s is imaginary. If s is i omega, well, minus i omega, or both, both possibilities, those will give us sine and cosine. So we'll add those to the nice function.

So the nice functions are t, polynomials. E to the st, exponentials. Sines and cosines. And you see this worked perfectly. Well, perfectly except we have to be sure that we don't have 1/0.

Let me keep going here to be sure we get all the possibilities. Again, we're getting a very small set of nice functions. But fortunately, they appear quite often in applications. Constants, linear like 4t, exponentials like e to the 5t, oscillation like e to the i omega t. So let me make a list.

I'm creating here a list of the nice functions-- polynomials, exponentials, cosine and sine, because those come from exponentials, and finally, I can multiply these. I could have, for example, t e to the st. I could allow that. And now, all I have to do is tell you, what form do I try to plug-in?

Here, what will I have? If I have cosine, I need the sine there also. So I'll have to allow a combination of those. Say M on this plus N of that. If I tried to do cosines alone, I would be in danger of taking the derivative, getting a sine, and having nothing to match. So I'll take that.

So what do I assume here? Well, when I see t there, I have to include, as I did up there, also constants. And if I saw a t squared, I would go up to t squared. I'd have three coefficients. Now, that e to the st, I can keep.

And then, just to make the problem a little messier, can't be helped, I'd need the sine. So I need a sine omega t. And I'm going to need a c plus dt there. OK. I'm up to four coefficients to determine by plugging in. It uses more ink, but it doesn't use more thinking. You just put it in, match all terms, and you discover A, B, C, and D.

Finally, I have to say that word about resonance that I mentioned earlier. The possibility that if s happened to be 1 or 2 on the right-hand side, that's also a null solution. This method would give me 1/0, infinite answer, no good. And we know what to do.

We know how to deal with resonance. So with resonance-- so could I just finally complete the whole story. Resonance. In this example, s equal 1 or 2. What would I do with f of t equals e to the t? If that was the right-hand side, that would give me resonance.

It's got the exponent s equal 1, which is also in the null solution, e to the t. So what do I try? So I try-- everybody knows what happens when there's resonance. When you have this doubling up. You need an extra factor t to rescue. So you would try y of t. y, this is the particular solution I'm looking for.

You would try t e to the t, with a Y. And you would plug that in. You would find the right number for capital Y. And you'd have the particular solution. Only, I think, doing a few examples of this, you get the knack of assume the right form, put it into the equation, match left side with right side, and that reveals the undetermined coefficients. It tells you what a and b and capital Y and c and d, tells you what they all have to be.

So this is a really good method that applies to really nice right-hand sides. Good. Thanks. 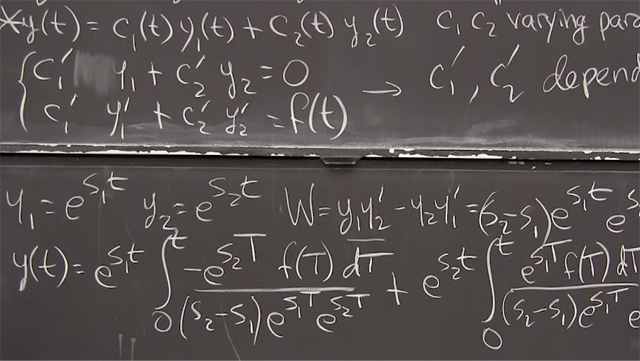