Albert on 11 Mar 2021
⋮
Commented: Albert on 14 Mar 2021
Hi, I need to optimize antenna pattern weights so that it has a certain value at certain directions. I've seen there is an example here: https://es.mathworks.com/company/newsletters/articles/synthesizing-an-array-from-a-specified-pattern-an-optimization-workflow.html also reproduced below
My objective is Beam_d, and stvmat is always a known vector (with complex numbers). What I want to find are the optimum weights in w
The following code seems to do the trick somehow; probably there are more advanced optimization options. The optimized weights output weights_o I would like it to be a complex value, as the weights can be expressed as an amplitude and a phase. In fact I would like to be able to restrict the output for example to only phase or only amplitude weights, but I have no clue on how to tackle this optimization. Could anyone provide some hints?
Thanks!
% We start with a desired 2D pattern, Beam_d, which is specific to a set of azimuth and elevation angles.
% %We then build a cost function to minimize the distance between the desired pattern, Beam_d, and the pattern generated from the weighting vector, weights_o.
% Our initial conditions for the optimization are based on uniform weighting. This pattern is included in the objective function shown in the code below.
%% Set up optimization
objfun = @(w)norm(w'*stvmat-Beam_d); % Define objective function used in fmincon
% Goal is to minimize the norms between
% the desired pattern and
% resulting pattern
weights_i = ones(N,1); % Initial setting for array amplitudes
% Serves as starting point to
% optimization
weights_o = fmincon(objfun,weights_i,[],[],[],[],zeros(N,1),ones(N,1));
% fmincon takes in the objfun,
% the initial weights, and
% upper and lower bounds of the weights
% In this example,
% 0 <= weights_o <= 1
% weights_o holds the weights
% which can be used to create
% a beam that matches our
% desired pattern

⋮
Hi! ok thanks for the tip. One thing that I would like to know is, even if I work with real numbers, many times I would like my cost function to be a threshold (an inequality) and not an absolute value (e.g. I want the solution to be above a certain value, not exactly that value). Is that possible to be done?
thanks

⋮
Hi,
Basically I need to find something similar to the example above:
objfun = @(w)norm(w'*stvmat-Beam_d);
stvmat is fixed, Beam_d is my objective, and I want to find the weights w
Depending on the weights I will get one or another shape in the black curve below. But I want to constrain the problem so that the centre part stays above the green line and the rest stays below the red line. Using this instruction I will rather fix a value in Beam_d, but in fact I don't care as soon as it is above and below the lines.
Perhaps in the end I only need to fix one point in the green line and a couple of points in the red lines. Does it sound clearer now? Sorry because I'm not experienced in optimization problems...
thanks 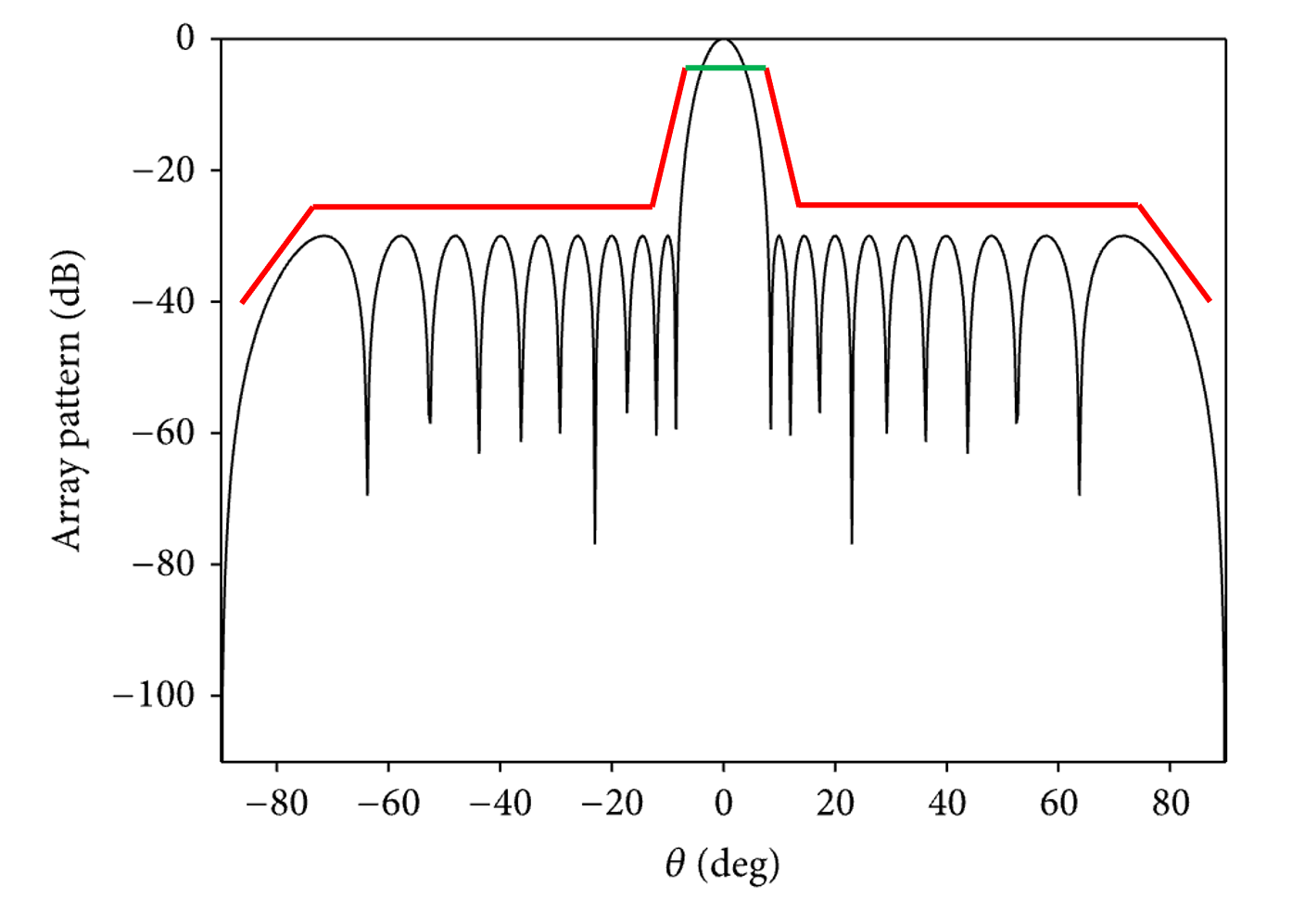 ⋮
I still don't understand your problem. The center part of the pictured black line is not entirely above the green line; some parts go below. Is that OK? The black curve does not go exactly through the two points that are the intersection of the green and red lines. If I understand you, the black curve must exactly intersect these points.
But maybe what you mean to say is that the center point of the black line must be above the green line, and some selected parts of the black line must be below the red line.
Once you have defined your constraints precisely, you can easily include them in your nonlinear constraint function.
There is an optimization example here that uses the surrogateopt solver to help design an antenna. Perhaps some of that example can help you with your problem.
Alan Weiss
MATLAB mathematical toolbox documentation

⋮
Hi,
My mistake because I quickly drew the lines. As you say all the x-axis points of the black curve should have been above the green line indeed! These are my two conditions, but I have no idea which is the best optimization tool for that. As I mentioned before the weights that give the black curve can be complex.
thanks