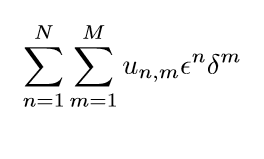 are complex coefficients, and

is omitted. I could provide the values of

if necessary, it is a 2D array of complex doubles of dimension

)
The above function references the function taylor_sum2
function [tsum] = taylorsum_2(c,Eps,Delta,N,M)
% taylorsum - Sums a truncated Taylor series.
%
% Inputs:
%
% c - Taylor series coefficients: [c_00,...,c_0N] ... [c_M0,...,c_MN] which are a 2D array of complex doubles of dimension (N+1) x (M+1)
% Eps - Value at which to sum for N
% Delta - Value at which to sum for M
% N - Degree of truncated Taylor series
% M - Degree of truncated Taylor series
%
% Outputs:
%
% tsum - Taylor sum evaluated at Eps and Delta
tsum = polyVal2D(c,Eps,Delta,N,M);
which then references the code written in polyVal2D. At line 31 of polyVal2D, code is written to check the input arguments of the coeffcients. It appears that the coefficients must be real for this code to work (my own testing returned odd results when this restriction was removed - all of the coefficients returned are greater than

⋮
Hello David,
I am looking at polyval or the sum of the known u_nm. I have the values of the u_nm through an external function and am applying polyval on the known values of the coefficients.