filled contour no longer creates patch children ... what is equivalent for setting the ZData?

Tim on 1 Feb 2016
⋮
Commented: Mike Garrity on 1 Feb 2016
Accepted Answer: Walter Roberson
I have a method for plotting the coastlines under or on top of some 3D scatter data, depending on whether the z levels are depth, pressure, or height. It used to grab the children of the contourf object and set the ZData property - independent of the actual values of the contourf object. This worked great until 2014b (?) and certainly doesn't work for 2015b ... I have not tried all versions. Attached is a short example - if you run it with 2014a or before, it works fine. 2015b fails - there are no patch objects generated by the contourf.
I have tried shifting the contourf z data to center the contour at the desired level, that did not work.

Walter Roberson on 1 Feb 2016
⋮
There is no equivalent mechanism now :( Parent a contourf() against an hgtransform that uses a translation along the Z axis of the desired Z value. You might need to do that for each distinct Z value.

⋮
That would look something like this.
Where you're creating the contour, you need to parent it to a hgtransform like this:
htrans = hgtransform;
htrans.Matrix = makehgtform('translate',[0 0 zlevel]);
[c,h] = contourf(lons,lats,topo,[0.0 0.0],'k-', ...
'Parent',htrans);
Then you can delete all of the code that's finding the patches and setting their ZData.
Unfortunately, when I tried this, I hit a few other issues. The first is that sometimes the ZLim you're getting from the axis command isn't a good choice because it can change later when the colorbar is added.
You weren't noticing that in earlier versions of MATLAB because of a clipping bug that would let the contour get drawn even if it was outside the ZLim. That clipping bug was fixed in R2014b. The simplest way to get a ZLim value that isn't going to change is to use
axis tight
After those two changes, I get this: 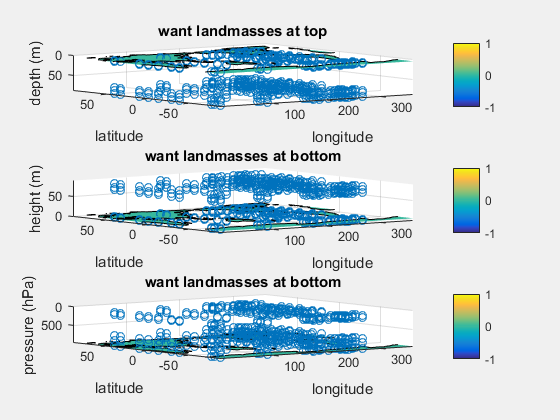 ⋮
Thanks Walter, I appreciate your fast response.
Fair enough. (for the interested) The syntax that worked for me is:
<create your scatterplot>
[~,h] = contourf(lons,lats,topo,[0.0 0.0],'k-');
t1 = hgtransform('Parent',gca);
set(h,'Parent',t1);
m = makehgtform('translate',[0 0 zlevel]);
set(t1,'Matrix',m)
this does indeed translate the filled contours to whatever zlevel you specify. I am now onto trying to set the color for that (single) filled contour to something that is not actually in the colorbar (a light gray, for example). I think I will abandon the translucency, etc. that I could specify for the patch objects.
I have attached a more mature version that additionally sets the colorbar levels to the level of the data values, not the range of the z limits (as in my first example).

⋮
Thanks to Mike as well. I was so preoccupied implementing and then tweaking my example script that I did not read Mike's post in a timely fashion. Mike - for the record - I just pared down a much more complicated example for the purposes of clarity. My full-blown function does handle the data limits and clipping appropriately. Thanks.