Geethanjali Pavar on 7 Oct 2022
⋮
Commented: Rahul on 17 Oct 2022
I have 10 separate figures, each of which has been created in the tiled layout format using a single tile. This was to have dual x and y axes on each figure. They were created elsewhere and saved as .fig files.
I need to combine them into a master figure with 5 rows and 2 columns. Each individual figure is a pcolor plot and they all have the same colormap, colorbar and colorbar title, so I would like to have just one colorbar (and colorbar title) instead of 10 tiny ones. I thought the best way to do this would be to have a "master" tiled layout, which each "sub" tile being one of the individual tiles.
I looked at some existing answers but they are for making the master tiled layout at the same time as the sub-tiles, whereas my sub-tiles are pre-existing .fig files that need to be loaded/imported and then copied over somehow.
I also looked at some existing answers on loading and combining previously saved figures into a subplot, but these were for "regular" figures, not tiled layouts with dual axes.
I would really appreciate any advice on how to do this, especially on what variables to copy from the original .fig files to what variables in the master tiled layout.
For clarity, I would expect the final code to be something like: 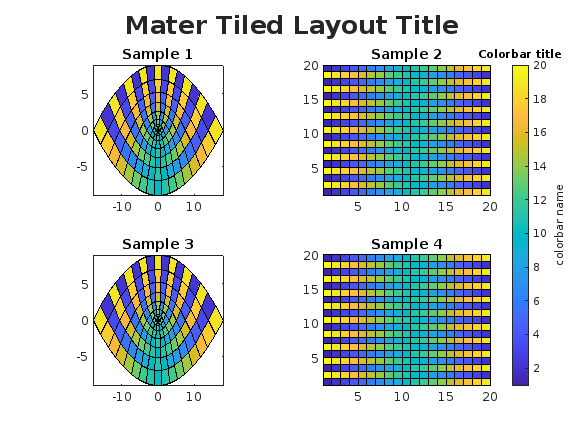 ⋮
Hi, Thanks for your answer. It is unforunately not what I was looking for - I already have FIG files of the individual tiles and need to import these, extract the plot and then put these plots into a new tiled layout. The answer you gave is for making the master tiled layout at the same time as the sub-tiles, which is not what I am trying to do.

⋮
Is it possible for you to share the fig files and/or the expected output (a rough sketch in Microsoft paint)?