⋮
What range of x and y do you want to show? This is a question you need to answer, as it depends on what you want to do. 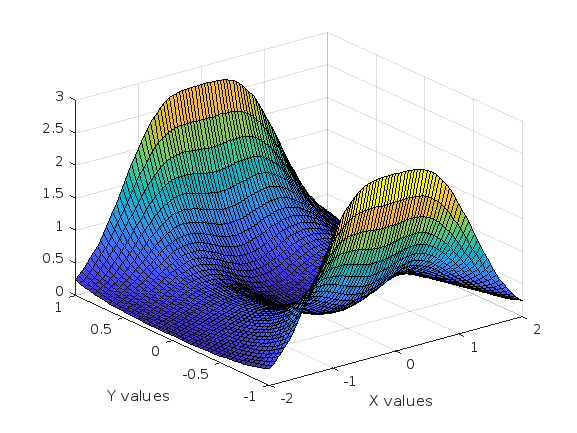 Walter Roberson on 13 Aug 2022
⋮
Generally speaking, you might hope to stop drawing a surface at the point at which it gets boring, because the derivative becomes sufficiently close to 0 (the plot becomes visually close to steady state). This guide is not perfect as there are plots such as log where the derivative becomes arbitrarily close to 0 and yet the change after that point is infinite.
So that the derivative of the function with respect to x and try to solve() that for x in terms of y when (say) the derivative becoming 1/100 or -1/100
... The solve() will fail, indicating no closed form solution.
So fsurf the derivative in the range ±3 to get a better idea of what is going on. You will see that for x roughly 1/2 that the derivative is increasing rapidly as y gets larger. So the function does not die down.
Switch back to fsurf the original function over the same range and you will see that it rapidly gets larger with changes in y.
There is therefore a sense in which the function gets increasingly more interesting as the magnitude of y increases: the changes near 0 become "noise" compared to the changes further away from 0.
And therefore it could be argued that if you are going to plot the function at all, that it deserves an infinite plot.