Radio astronomy is the study of celestial objects through analysis of radio waves. This field allows scientists to observe astronomical phenomena that are often undetectable in other portions of the electromagnetic spectrum. In its brief 70-year history, radio astronomy has revealed new types of celestial objects, including pulsars and quasars, and notably, cosmic microwave background radiation, which is the cooled remnant of the Big Bang event that formed our universe.

Processing digitized signals from antennas in real time is a key challenge in radio astronomy. A single antenna element can produce data on hundreds of 200 gigabits per second, and data from multiple elements are often combined to improve resolution and sensitivity. Processing such massive amounts of data is complicated by the fact that radio astronomers are often interested in very short time scales—a burst from a pulsar typically lasts only a few milliseconds. When an unexpected interesting event is observed, astronomers rely on rapid data analysis to enable them to quickly direct other telescopes toward the phenomenon.

Traditionally, the development of real-time instrumentation for processing radio data involves hiring seasoned electrical engineers to design and implement the system using custom electronics. This approach has proven costly and time-consuming, with projects often taking more than a decade to complete. In many cases, by the time the instrumentation was operational, the instrument technology seemed antiquated because of the rapid growth of the electronics industry.

At UC Berkeley, the Center for Astronomy Signal Processing and Electronics Research (CASPER) has developed a Simulink® based library that simplifies and accelerates the development of radio astronomy instruments. The platform-independent CASPER library enables astronomers to rapidly deploy new instruments by assembling parameterized functional blocks into designs that run on reconfigurable, modular hardware. This approach combines the real-time performance of application-specific hardware with the straightforward design workflow of Simulink. As a result, engineers and scientists can build and deploy sophisticated radio astronomy instruments at a fraction of the cost of earlier custom-hardware instruments— often within a few months.

To get started with the CASPER library, researchers typically complete online tutorials that teach basic functionality, eventually progressing to building a digital spectrometer. If they plan to combine signals from multiple telescopes, they may also complete tutorials for building a wideband interferometer or correlator, such as the 32-element FX-style correlator shown in Figure 1. 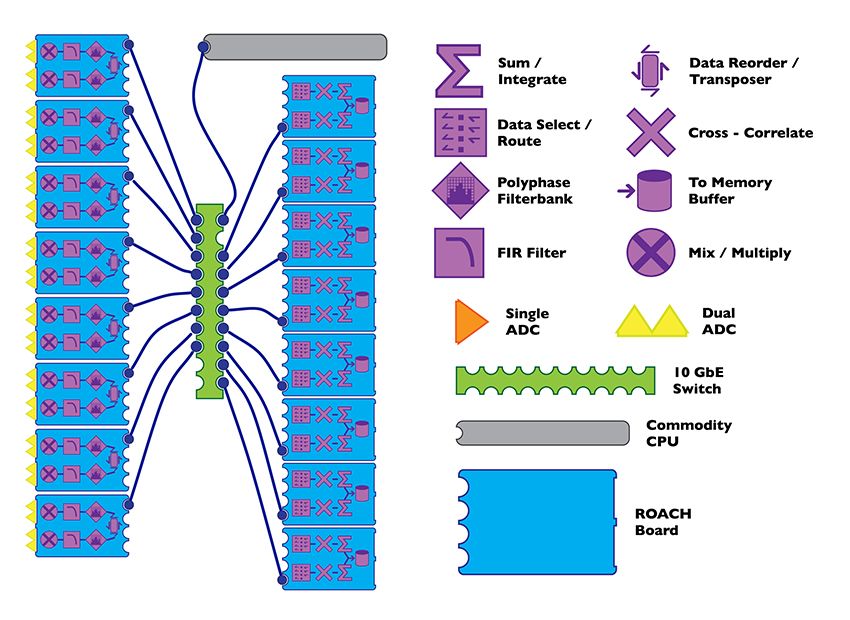 Figure 1. A 32-input 'FX'-style correlator, built using 16 ROACH boards and a 10 gigabit Ethernet switch. Half of the ROACH boards channelize the input signals (the 'F' operation); the other half perform cross-correlation and accumulation (the 'X' operation). Data is routed through a commercially available 10 GbE switch.

After learning about CASPER library elements and how they can be linked, researchers can design a complete instrument system of their own in Simulink (Figure 2). Simulations of the instrument system can be run in Simulink by using a wave generator to produce a sample input and a scope or spectrum analyzer to visualize the output. 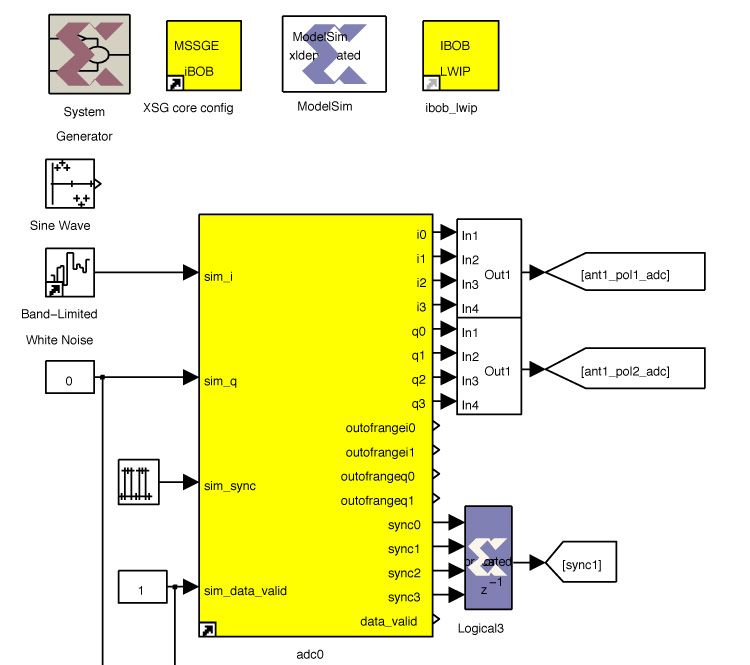 Once the design has been verified through simulation, researchers generate HDL code using Xilinx® System Generator for DSP. The code is then synthesized and deployed to the BEE2, IBOB, or ROACH I or ROACH II boards that form the hardware platform for the system (see sidebar). Astronomers can directly target Xilinx FPGAs because each CASPER library component has been developed using the bit-true and cycle-true Xilinx System Generator for DSP blockset.

Before connecting the completed hardware implementation to a radio telescope, the astronomer typically connects it to real signal inputs and noise sources to verify that it operates as intended.

The Fly's Eye and Other CASPER Applications

Among the many instruments that have been built using the CASPER libraries and hardware is the Fly's Eye, a digital spectrometer designed to search for highly energetic radio pulses. Interest in this field peaked recently when an enigmatic bright radio pulse was discovered in archival data from the Parkes radio telescope in Australia. 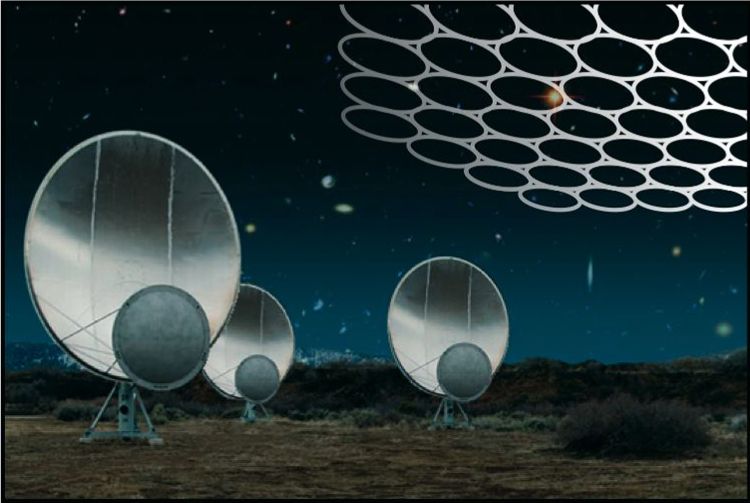 Figure 3. The Fly's Eye spectrometer within the Allen Telescope Array.

The 200-megahertz, 128-channel instrument, which consists of 44 independent spectrometers, was constructed using Simulink, the CASPER library, and 11 IBOBs. In a conventional interferometric mode, all dishes are pointed at the same location in the sky to increase resolution and sensitivity. The Fly's Eye processes signals from 42 independently pointed telescope antennas. This approach provides an enormous field of view on the sky and excellent sensitivity to rare, bright events.

A traditional implementation of the Fly's Eye could have consumed five years of a seasoned digital engineer's effort. However, using the Simulink design environment paired with CASPER modular computing boards and libraries, a team of three undergraduates and one graduate student completed its development in about a month. Another CASPER instrument, designed to detect radio pulses from high-energy neutrinos interacting with the Moon's crust, was constructed by a University of Iowa Ph.D. student in about one week.

The Fly's Eye is just one of many successful instruments that have been built using the CASPER library. Scientists at the National Radio Astronomy Observatory in Green Bank, West Virginia, recently discovered the most massive neutron star ever measured using a pulsar spectrometer built with the CASPER library. In another effort, Massachusetts Institute of Technology's Haystack Observatory and the Harvard-Smithsonian Center for Astrophysics led an effort that used CASPER-based technology to achieve the highest resolution observations of the supermassive black hole at the center of our galaxy. The Karoo Array Telescope (MeerKAT), currently under development in South Africa, will eventually be among the world's largest and most powerful radio telescopes, and it will rely on CASPER-based digital processing systems.

A Bright Future for CASPER

While astronomers are not usually familiar with HDL or hardware design principles, they often have some experience with programming in a scripting language or in C. In addition, many scientists in our user community are familiar with MATLAB® or Simulink. For example, they may already use MATLAB to postprocess their data or simulate observations and antenna performance. The real strength of the CASPER approach is that astronomers and physicists around the globe can be empowered through Simulink to design their own digital hardware. The intuitive graphical design environment makes it easy to construct sophisticated systems out of modular components and run simulations before synthesizing them on reconfigurable hardware. The result is a greatly accelerated design workflow for creating new radio astronomy instruments, accessible to scientists with only modest engineering experience.

History has shown that every time we examine the cosmos in a new way—through a different wave band or time scale—we make new, often unexpected, discoveries. Novel astronomical instruments are the driving force behind these new glimpses of the universe, securing a bright future for the astronomers and engineers that build them.

When the CASPER group began collaborating with BWRC, the teams quickly realized that the general-purpose BEE2 board with its five FPGAs could support radio astronomy applications but lacked the ability to directly acquire digitized radio telescope data. For this, the CASPER group developed the Internet breakout board (IBOB), which serves primarily to digitize and packetize analog data.

Combinations of BEE2s and IBOBs have enabled research teams around the world to develop sophisticated radio astronomy instruments for a variety of scientific goals.

The CASPER group, in collaboration with the National Radio Astronomy Observatory and the Karoo Array Telescope, recently developed the Reconfigurable Open Architecture Computing Hardware (ROACH I and ROACH II) boards, which combine many of the capabilities of the BEE2 and IBOB boards into a single module.

Andrew Siemion is an astrophysics Ph.D. candidate at University of California, Berkeley. His research activities include the design, construction, deployment, and use of instrumentation for the detection of powerful dispersed radio transients.